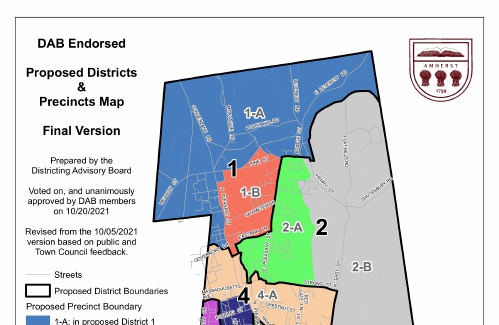 AMHERST – New electoral districts that could hold black, Indigenous and colored voters accountable in future municipal elections will come into effect from next year.

The city council voted 10 to 1 on Monday to approve the district advisory council’s final proposal for five voting districts, each consisting of two constituencies with less than 4,000 residents, a state requirement. At-Large Councilor Mandi Jo Hanneke voted against the plan and two councilors were absent.

The redistribution was mandated following the 2020 federal census showing Amherst with a population of 39,263.

â€œI want to thank the District Advisory Board for your incredibly hard work,â€ said board chair Lynn Griesemer, who also called the plan a â€œpuzzle that was almost a nightmareâ€.

A highlight of the redistribution is that the apartment complexes on East Hadley Road will no longer be in the same neighborhood as Amherst Woods, Amherst Hills and other neighborhoods where some of the city’s most expensive homes are located. Instead, these apartments will be located in a new District 3, connected to parts of the University of Massachusetts campus.

Hanneke raised issues with aspects of the plan, including the fact that residents of Lincoln Avenue, a road that runs from the UMass campus south to Northampton Road, will be divided into three districts.

â€œThis is worrying for the downtown area,â€ Hanneke said. “I do not know what to do.”

District 3 councilor Dorothy Pam, who represents parts of the Amherst center, disputed the change would be detrimental. â€œI don’t see this as a problem. It’s used to being divided, â€Pam said.

At a previous meeting, Hanneke also raised objections to the distribution of students between districts.

But District Advisory Board member Tracy Zafian said only 17 percent of students on campus would be moved to new neighborhoods, compared to 39 percent of residents overall, and students would remain spread across four neighborhoods, this which is the case on the current map.

In a memo, the council also challenged whether it deprived students of the right to vote, especially students who live in dormitories, or discriminated against a particular population group on the basis of age. The memo notes that student representatives “indicated and reiterated that they did not think it was important to keep all dorms in a dorm complex in the same neighborhood or compound.”

Although District 3 Councilor George Ryan voted in favor, he said he remained disappointed that the dividing line between District 3, now grouped with the South Amherst apartment complexes, and District 4, in the city center, or Amity Street, rather than Northampton Road. He said downtown neighborhoods are more in line with downtown interests than South Amherst.

But Griesemer, as a councilor for District 2, said the composition of the districts is already large and there are many problems present. â€œWe have so many different neighborhoods, it really doesn’t matter,â€ Griesemer said.

Scott Merzbach can be contacted at [email protected]