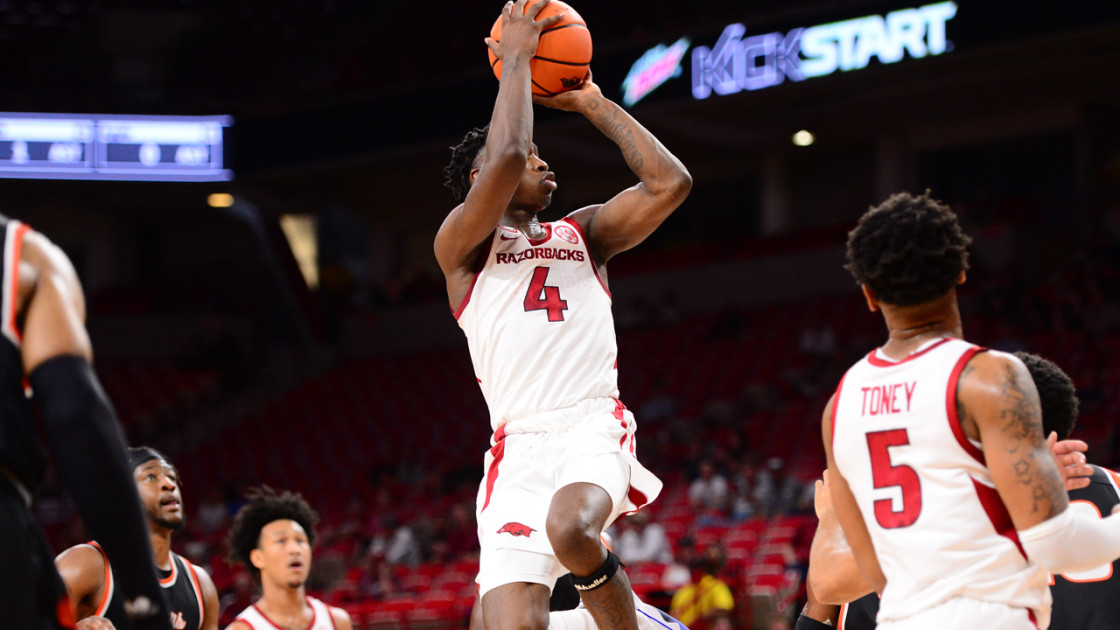 FAYETTEVILLE – Arkansas, down 14 with 11 minutes remaining, needed a 20-4 run and free throws from Davonte Davis, Chris Lykes and JD Notae in the final minute to claim a 77-74 victory over East Central University Sunday afternoon at Bud Arena Walton.

East Central, coached by former Arkansas graduate assistant Max Pendery, took the lead midway through the first half and extended their two-point lead to 14 (60-46) with 11:02 to play. From that point on, Arkansas continued their run 20-4. It all started with a 6-0 push ahead of a Tigers’ basket. The Razorbacks then scored 10 without a response before the Tigers scored. The Razorbacks had four straight games to end the comeback and lead 66-64 with 5:09 to go.

Davis led Arkansas with 20 points while Notae added 17. Toney recorded a double-double with 10 points and a high of 15 rebounds (nine offensives). He also fired a charge with 35 seconds left, which helped secure the victory. Williams, whose energy and three blocked shots contributed to the victory, narrowly missed a double-double with 10 points and nine rebounds. Lykes finished with 13 points.

Apple led all scorers with 23 points while Jalen Crutchfield scored 15 for East Central.

Next, Arkansas will host North Texas on October 30 (Saturday). Kick-off is 4 p.m. at Bud Walton Arena. The game is sold out as it is part of the 2021-22 men’s basketball season pass package.