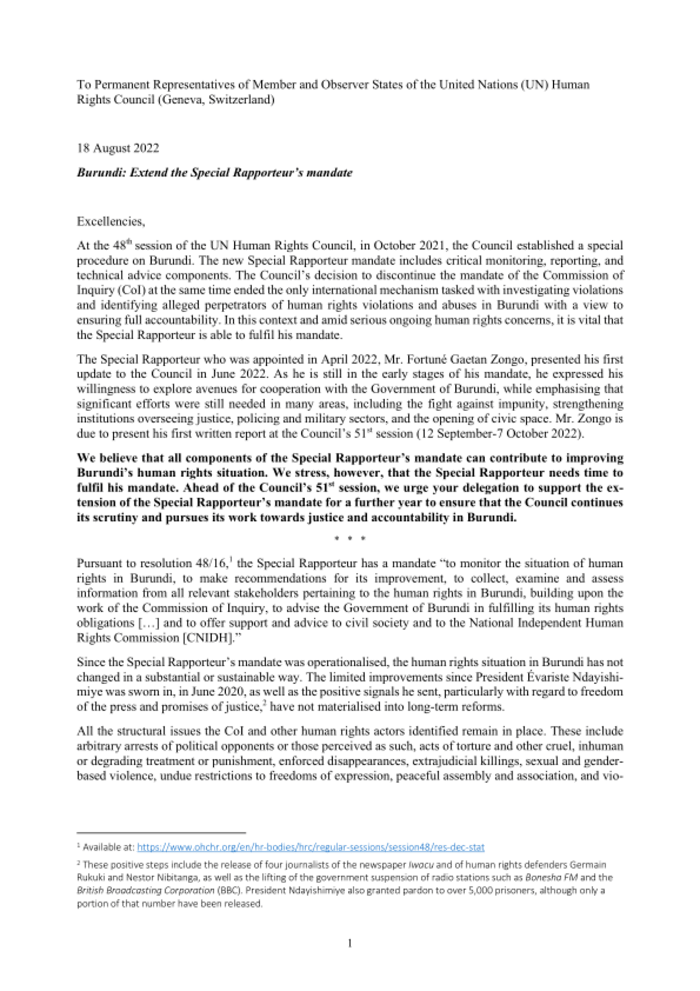 Burundi: Extend the mandate of the Special Rapporteur – Burundi

TO THE PERMANENT REPRESENTATIVES OF MEMBER AND OBSERVER STATES OF THE UNITED NATIONS (UN) HUMAN RIGHTS COUNCIL (GENEVA, SWITZERLAND)

During the 48th session of the United Nations Human Rights Council, in October 2021, the Council established a special procedure on Burundi. The Special Rapporteur’s new mandate includes critical elements of monitoring, reporting and technical advice. The Council’s decision to end the mandate of the Commission of Inquiry (CoI) at the same time ended the only international mechanism to investigate violations and identify alleged perpetrators of violations and abuses of human rights in Burundi to ensure full accountability. In this context and amid continuing serious human rights concerns, it is essential that the Special Rapporteur be able to fulfill his mandate.

The Special Rapporteur who was appointed in April 2022, Mr. Fortuné Gaetan Zongo, presented his first update to the Council in June 2022. As he is still in the early stages of his mandate, he expressed his willingness to explore avenues of cooperation with the Government of Burundi, while emphasizing that significant efforts remained to be made in many areas, in particular the fight against impunity, the strengthening of the supervisory institutions of the judicial, police and military sectors, and the opening of civic space. Mr. Zongo is due to present his first written report during the 51st session of the Council (12 September-7 October 2022).

According to resolution 48/16, the Special Rapporteur has the mandate “to monitor the human rights situation in Burundi, to make recommendations for its improvement, to collect, examine and evaluate information from all relevant human rights stakeholders in Burundi, building on the work of the Commission of Inquiry, to advise the Government of Burundi in fulfilling its human rights obligations […] and to offer support and advice to civil society and the Independent National Human Rights Commission [CNIDH].”

Since the Special Rapporteur’s mandate became operational, the human rights situation in Burundi has not changed substantially or lastingly. The limited improvements since President Évariste Ndayishimiye was sworn in in June 2020, as well as the positive signals he has sent, particularly regarding press freedom and promises of justice, have not materialized in long-term reforms.

All structural problems identified by the CoI and other human rights actors remain in place. These include arbitrary arrests of political opponents or people perceived as such, acts of torture and other cruel, inhuman or degrading treatment or punishment, enforced disappearances, extrajudicial executions, sexual violence and sexist rights, undue restrictions on the freedoms of expression, peaceful assembly and association and violations of economic, social and cultural rights that are closely linked to the economic foundations of the state.

Independent national and international human rights organizations are still unable to operate in Burundi. Several of the country’s most prominent human rights groups remain suspended or banned since 2015. Lawyer and former human rights defender Tony Germain Nkina remains in detention after the Ngozi Court of Appeal upheld his conviction for politically motivated charges related to his human rights work. and five years in prison. Many human rights defenders and journalists remain in exile, twelve of whom were convicted in absentia and sentenced to life imprisonment, as announced by the Supreme Court of Burundi in February 2021.

Serious violations continue, including those that previously led the CoI to conclude that crimes against humanity may have been committed. Impunity remains widespread, particularly with regard to serious crimes committed in 2015 and 2016. The police and security forces, the National Intelligence Service (SNR) and the imbonerakure (the youth wing of the ruling CNDD-FDD party) are responsible for most of these violations.

In February 2022, Burundian human rights organizations pointed out that “no significant progress has been observed in terms of human rights in the country”, highlighting the absence of human rights reforms. the man. “The situation we fled remains the same today,” they added, asking in the words of a defender, “How could we return to a country where one is at risk of being kidnapped, arbitrarily arrested or murdered?”

The Board’s approach should be based on benchmarks to measure tangible progress, based on key indicators identified by the CoI. In doing so, the Council will recognize that any substantial change in its review of the human rights situation in Burundi will result from demonstrable and sustained progress on key issues of concern. The Council should also take into account the risk factors for new violations.

The government of Burundi continues to reject Council resolutions, refuses to meaningfully cooperate with United Nations human rights bodies and mechanisms, and has explicitly refused to cooperate with the Special Rapporteur.

The renewal of the mandate of the Special Rapporteur comes at a critical moment, when the leaders of the ruling party are mobilizing imbonerakure. As was the case in the run-up to the last elections in Burundi, political repression is likely to worsen in the coming year. As the only international mechanism with a specific mandate to monitor the human rights situation in Burundi, it will be crucial for the Special Rapporteur to be able to report to the Council on violations and abuses during the future period, including following up on possible cases of harassment and other violations. targeting members and sympathizers of the opposition by imbonerakure.

In the absence of structural improvements and while serious human rights violations and abuses continue to be committed with impunity, the Council should adopt a resolution that reflects the realities on the ground and ensures continuous monitoring, reports and public debates on the human rights situation in Burundi. It should give the Special Rapporteur the time he needs to carry out his mandate and urge Burundi to cooperate with him, including by granting him access to the country.

At its 51st session, the Council is expected to adopt a resolution extending the mandate of the Special Rapporteur on Burundi for one year.

We appreciate your attention to these pressing issues and stand ready to provide your delegation with further information if required.

The Program Council will host the WelcomeFest concert on August 20