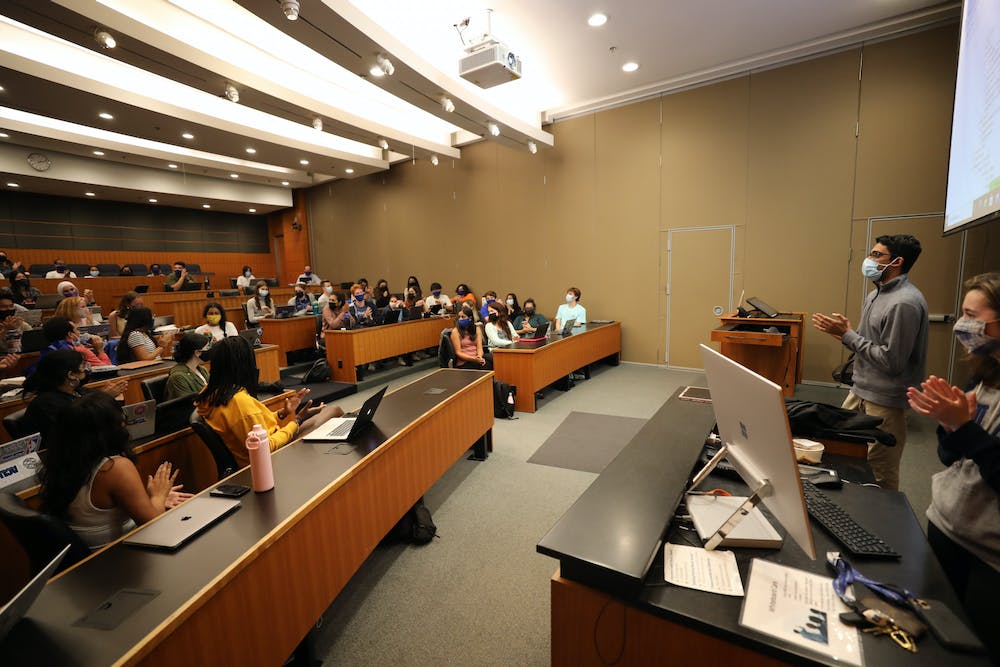 Juwan Jacobs, the DSG Advisor and Deputy Director for Student Engagement and Leadership, introduced himself as the organization’s new advisor. He was attended by DSG Chair Lana Gesinsky, Sr., alongside Executive Vice President Devan Desai, Sr.

Gesinsky highlighted his campaign’s calls for “community, clarity and communication” and a “time for change” during his opening remarks.

“It’s really easy to think about yourself, about what you want, [and] what you would do. I think this year, just try to remember that we are elected for the students, by the students,” she said.

Gesinsky and Desai also covered upcoming first-year electoral reforms. General applications open to first years will be due September 28 with interviews held after the fall break. However, elections for freshman senators, which used to be held during the first two weeks of class, won’t be held until “on the Wednesday or Thursday just before fall vacation,” according to Desai.

“Your second week on campus is literally terrifying. No one even knows your name,” Gesinsky said. “They try to integrate into their classes and have to apply for a position. That’s why we’re pushing it back. We think this makes it easier for the first few years.

“Instead of us evaluating them, they’re evaluating us and saying, ‘Is DSG right for me?’ “said Gesinsky. “It’s one of the first steps we’re trying to take with transparency and communication.”

Pro Tempore President Isaiah Hamilton, a junior, made announcements regarding DSG protocols, such as aiming to move meetings to 7:00 p.m. instead of 8:00 p.m. and removing the DSG Zoom option.

“For this year, [I’m] hoping everyone leads with kindness, leads with respect — allowing people to make mistakes in this space,” he said.

Junior Anthony Salgado also announced his resignation from vice president of equity and outreach. He will be replaced by Zara Thalji. Salgado will always retain his role as senator.

“There are a lot of things that I think the Duke administration has really swept under the rug for Latinx students, for low-income, first-generation college students. [My] resigning from this role does not necessarily mean that I will stop fighting for these groups,” he said. “I really want to take the opportunity to reassess what community means to me, what organizing means to me, what building a coalition means to me. »

After nearly half an hour of debate, senators voted 18-8 to allocate $3,550 from the DSG funds code for custom voting devices used for Senate attendance. The funds will be managed by Desai, Hamilton and Jacobs. Any unused funds will be returned to the DSG fund code.

“Voting devices will be used to maintain an accurate record of all votes relating to Senate DSG legislative activity and for attendance purposes,” the budget law states.

Hamilton said electronic voting selectors would “normalize participation and voting, which I think would help with efficiency.”

Senators allocated $1,660 to duARTS’ “Dear Evan Hansen” show, $4,500 to the Duke Dance Council’s fall showcase, $2,450 to the Duke Symphony Orchestra’s Pops concert and $6,000 to the speaker event of the Muslim Students Association with Suhaib Webb.

The senators also approved an organizational name change to Duke STEM Connect, formerly Duke Health and STEM Connect. According to the name change form, the organization decided on the change after the leadership team saw that it no longer “actively included[d] health/education/food enrichment activities [its] club/volunteer operations.

The Senate also confirmed nominees for student representative positions on the University’s Presidential and Provost Committees and internal Senate Committees by a vote in the House.

Appointments to the Presidential Committee

DSG senators named Gesinsky to the President’s Council on Black Affairs and the university’s Priorities Committee. The chairman of the DSG is assigned a place in both committees by the internal regulations of the committee.

Dave Surzykiewicz and a future cabinet member who will be confirmed in the coming weeks have been nominated for the President’s Sports Council.

Aashna Sawhney has been nominated for the President’s Campus Sustainability Committee.

Ashley Bae and Zoe Tishaev have been nominated for the Presidential Committee on Facilities and Environment.

Desai was nominated for the President’s Advisory Committee on Institutional History.

Tishaev was nominated for the President’s Arts Advisory Committee.

Bianca Ingram was nominated for the President’s Council on Black Affairs, in addition to Gesinsky.

Jax Nalley was nominated for the Provost’s Academic Programs Committee.

Chloe Decker was nominated for the Provost’s Interdisciplinary Strategic Council.

Karen Xu was nominated for the Provost’s Library Council.

Tobin was nominated for the provost’s college calendar committee and Talia Granick was chosen as the alternate.

Brar, Decker, Shreya Joshi, Rajagopal and Victoria Wulff-Anderson were appointed to the Board of Elections.

Brar, Brennan, Salgado and Thalji were named to the Financial Oversight and Appeals Committee.

Get The Chronicle straight to your inbox

Audrey Wang is a sophomore at Trinity and the editor of college news for the 118th volume of The Chronicle.