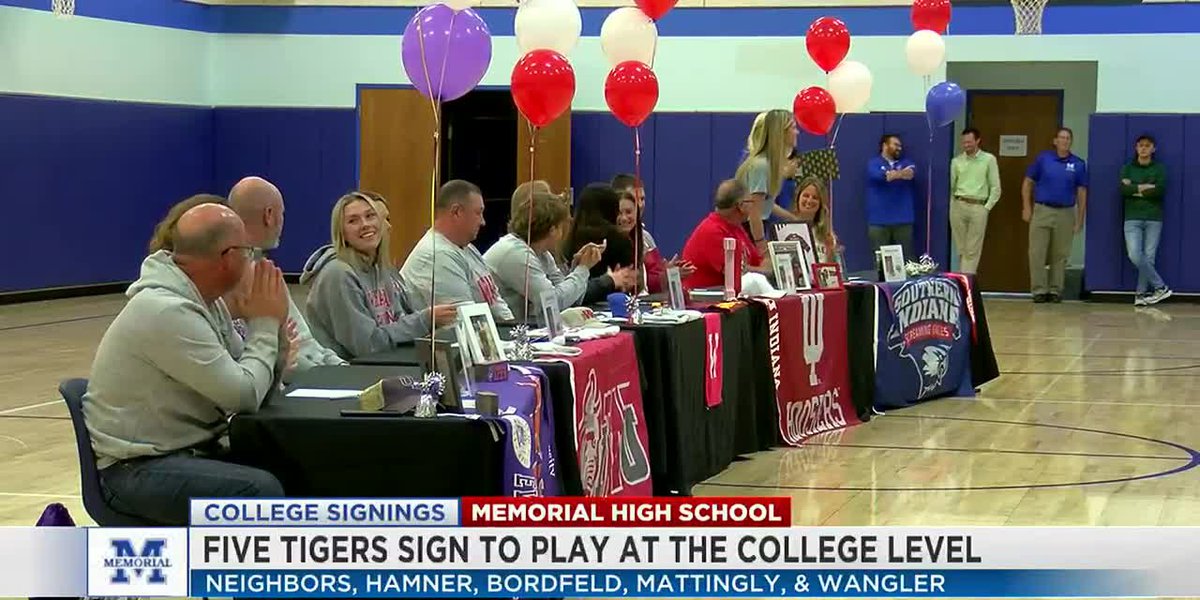 Four of the signers won back-to-back IHSAA Football State Championships with the Tigers and went undefeated in their final season.

Neighbours, who committed to Indiana University as an 8th grader, was a varsity player for four years and served as a team captain in his junior and senior years. The Neighbors scored 57 goals and had 69 assists in his four years for the Tigers – including the assist in second overtime in the state championship game of his junior season. She received many individual honors as a Tiger including, All-City Honorable Mention and Academic All-City her freshman season, Indiana Soccer Coach Association (ISCA) 3rd Team All-State, Indiana Coaches Girls Sport Association (ICGSA) 2nd Team, and Academic All-City as a sophomore, United Soccer Coaches Association Region Team, ISCA 1st Team All-State, ICGSA 1st Team, on the High School All-American Watch List as a junior, and ISCA 1st Team All- State, ICGSA 1st Team, Zionsville Lady Eagle invites the All-Tournament Team, Evansville Co-Player of the Year, Conference Co-Player of the Year and Kiwanis Award winner of her senior season. She was 1st team All-City, All-Conference, All-District, and on the All-Metro team her sophomore, junior, and senior seasons. She will also participate in the annual All-American High School game in December. Kennedy is the president of BESTIES, a member of the National Honor Society, Tiger Pride, Student Council and Student Athlete Advisory Council. At IU, she plans to major in biology or biochemistry and pursue a career in the dental or medical field.

Hamner was a MAXPREPS Indiana High School Athlete of the Week after scoring 3 goals in the IHSAA State Finals, which tied the IHSAA record and set the 2A record. Hamner was Academic All-State, 1st Team All-SIAC, 1st Team All-District his junior and senior years, as well as 2nd Team All-State and United Soccer Coaches All-Central Region Team junior year, and 1st Team All-State, conference co-player of the year and Evansville co-player of the year in his senior season. Ella is also involved with student council, BESTIES, Tiger Pride and a member of the National Honor Society. She plans to go to pre-physical therapy.

Bordfeld has been a varsity player for the Tigers on the football team since her sophomore year and on the basketball team for all four years. In addition to receiving several honors for basketball, she was honorable mention All-City junior year and 1st team All-District, 2nd team All-State and 1st team All-City her senior football campaign. Bordfeld is also a member of the National Honors Society, Tiger Pride, BESTIES and Tiger Fest.

While Mattingly has thrived defensively on the football field as a college player since her sophomore year, she fell in love with basketball at a young age. She was on the varsity basketball team for all four years of high school. She was 1st Team All-Conference her freshman year, 2nd Team All-Conference her sophomore year and honorable mention All-Conference her freshman year, and she was Academic All-City (grades 9-11). In addition to several individual basketball and football honors, Mattingly also boasts an outstanding academic resume. Emily is a member of the National Honors Society, recipient of Tomorrow’s Workforce Leadership Award, honored in Young Optimist Appreciation Day and the IHSAA Mental Attitude Award after winning the 2022 Soccer Championship. She is also a member of the Advisory Board student athletes and the student council. Mattingly will pursue a nursing career at Indiana Wesleyan.

Due to the COVID-19 pandemic, Wangler didn’t get a chance to have a baseball season in his freshman year, but he’s been on the varsity baseball team since his sophomore year. Wangler is a two-time sectional champion, was on the All-Metro team his freshman year, and was Academic All-City his sophomore and graduate years. He is a member of the National Honors Society, in Tiger Pride, and leads student sections at other sporting events. Nick plans to study business administration at Wabash College.