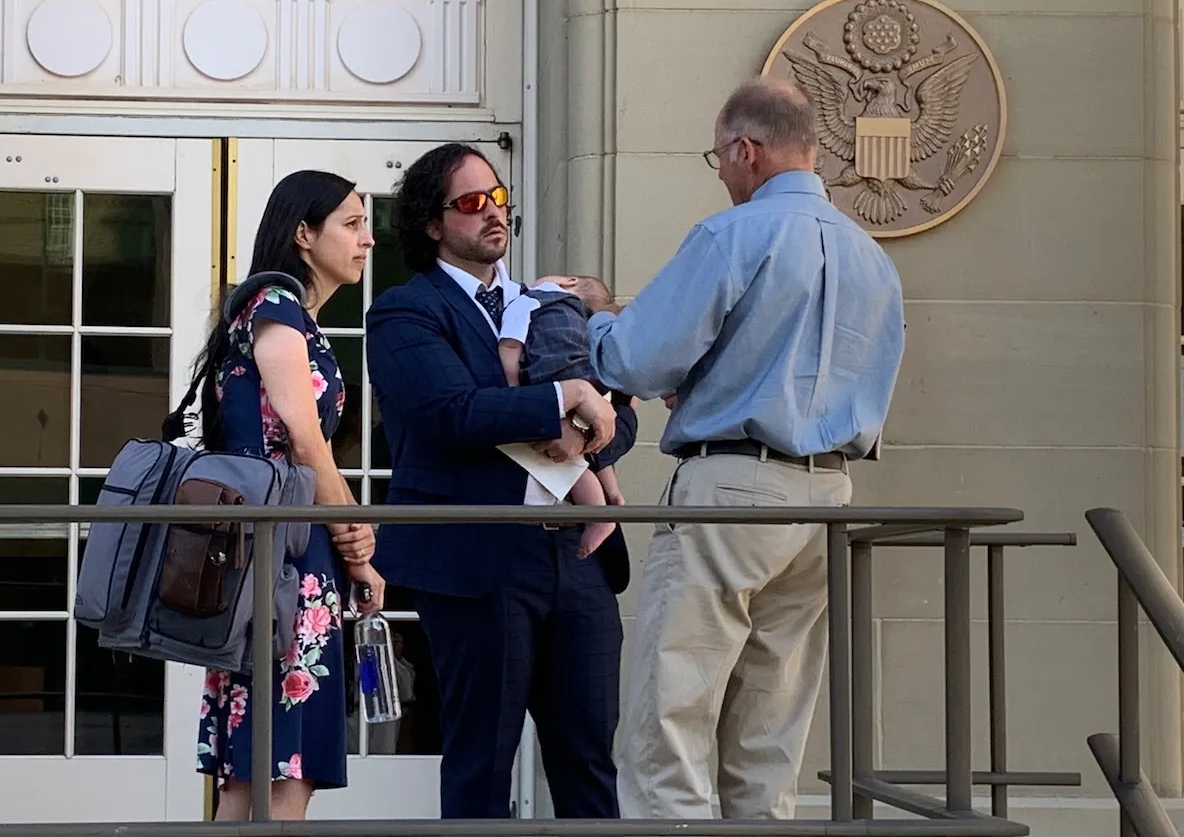 Former Wyoming Catholic College CFO Paul McCown has been sentenced [July 5] to five years and three months in prison and ordered to make restitution for his elaborate scheme to defraud a federal coronavirus relief program and a New York investment firm out of millions of dollars.

U.S. Chief District Judge Scott W. Skavdahl sentenced McCown on seven counts of wire fraud, which will be served concurrently at a federal facility to be determined in Orange County, California. Judge Skavdahl cleared McCown to go to correctional officers on a date to be determined by a probation officer.

Arguing for a harsher sentence of 78 to 98 months, Assistant US Attorney Christyne Martens said McCown carried out the massive fraud – including posing as bank officers, lying about what he claimed being a booming gin distillery business and falsely claiming to have amassed an immense fortune of over $750 million – in a “cold and calculated” way.

“His conduct here is nothing short of devastating to the people around him,” Martens said. “We have a smart, driven person who knew it was wrong, knew it would hurt, and did it anyway.”

McCown’s attorney, Jason Tangeman, argued for a lighter sentence of 48 months. Tangeman described his client as a troubled soul who on the outside was a ‘model citizen’ but suffered from shame and a sense of worthlessness which led to a ‘hero complex’, abuse alcohol, marital infidelity and fraud.

“He will never again be before a judge in a criminal case,” Tangeman said.

As part of his fraud, McCown offered a $10 million donation to tiny Wyoming Catholic College, making him by far the biggest contributor to the storefront school of just 190 students. Based on his contribution—most of which was later confiscated by FBI investigators—the college announced an ambitious expansion that was later scaled back.

After moving from Michigan to Lander in 2018, McCown quickly established himself as a prominent member of Lander’s business community, serving on the city planning commission and serving as treasurer of the Lander Economic Development Commission. McCown embraced the Western lifestyle, donning a cowboy hat and proudly proclaiming himself a “cowboy Catholic.”

But after the details of his fraud first came to light in a 2021 federal civil lawsuit, his brief stint as a local hero came to an end. In March, the 35-year-old father of four pleaded guilty to seven counts of wire fraud. Each count carried a potential maximum sentence of 20 years and a fine of $250,000.

“I hate white-collar crime,” Judge Skavdahl said as he announced the 63-month sentence Friday at the Casper Federal Courthouse. The judge noted that the amount of planning and deception in the case was significant and calculated over a long period of time. Sending a message to the public as a deterrent against similar fraud was a factor in McCown’s sentencing, he said.

During the sentencing hearing, McCown appeared in tears. After stopping to compose himself, he told the court that on the day in July 2021 he was first visited by federal investigators, Wyoming Catholic College President Glenn C. Arbery posted a column on the college website about Dante’s Inferno.

“In Dante’s Inferno, the worst circle in hell is betrayal,” McCown said through tears. “And that’s what I did.”

Over the past year, McCown said he confessed his deepest sins and secrets to friends and family. “The most shocking thing is that I always thought all my life that if people knew who I really was, they would run the other way,” he said.

He then turned to his wife, who was standing in the courtroom cradling their baby. “I’m sorry,” he said. “I betrayed you in every possible and terrible way – and you are still here.”

According to federal court records, the fraud began in the spring of 2020 when McCown received $841,863 from the federal coronavirus relief program, or CARES Act, which was administered by the Wyoming Business Council.

To get the money, McCown falsely claimed to have an active gin distillery that had 81 employees and an annual payroll of $5.3 million. McCown later claimed to have converted his business into a booming hand sanitizer operation that had contracts to supply airports and NFL stadiums.

Alerted to possible fraud by online tips, the Wyoming Business Council conducted an audit in January 2021 and raised concerns with the Federal Bureau of Investigation. After the FBI determined that “McCown’s gin business had never sold gin or incurred any pandemic-related losses or expenses,” the Business Council demanded that McCown return the $841,863.

There is no agenda.

WyoFile aims to provide you with the tools to make informed decisions by producing independent, impartial, free and accessible reports. Donate today to help keep Wyoming empowered and informed

Your input is appreciated. Donate Now

This led to the second part of the elaborate fraud scheme, in which McCown posed as a Wyoming Community Bank agent and forged bank statements while claiming to have a personal fortune of over $750 million. He then told representatives of New York investment firm Ria R Squared, Inc. that he wanted them to manage his money, but asked for a bridge loan of $15 million until the transfer. end of his fortune at Ria R Squared can be made.

The New York company accepted the $15 million loan (minus $300,000 for management fees) and passed it on to McCown, who then quickly distributed it to his personal Goldman Sachs account and to relatives and friends. Claiming he had amassed great wealth from his alleged distillery and hand sanitizer business, McCown also donated $10 million to Wyoming Catholic College and, according to court records, pledged $10 million. what’s more.

Fully in his role as a generous philanthropist and local hero, he told members of the nonprofit civic organization Lander Ambassadors that he was willing to donate up to $1 million for a one-day music festival. day with famous artists like Grammy-winning country and west. singer Kacey Musgraves.

After discovering the fraud, Ria R Squared sued McCown, Wyoming Catholic College, and other beneficiaries of McCown’s largesse, including Wyoming Catholic College vice president Jonathan Tonkowich, to whom McCown gave $750,000. FBI agents were able to seize more than $13 million, but federal lawsuits are still pending to recover the money from the college and Tonkowich.

The federal charges against McCown only related to the Wyoming Business Council’s COVID-19 grants and the Ria R Squared loan. Not included in the charges are a $1.1 million federal loan he got under the COVID-19 Paycheck Protection Program, nor the $1.29 million from two PPP loans he got. he earned for Wyoming Catholic College as chief financial officer.

For the WCC loan, he claimed that the college had 187 employees while the school itself had less than 200 students. When questioned later, WCC administrators estimated that the actual number of employees was 60 full-time and five part-time. Obtaining the PPP loans was itself a break from the college’s longstanding policy of not accepting federal money in order to avoid federal education requirements.

At the July 8 sentencing hearing, lawyers haggled for nearly three hours over the “actual loss” awarded to Ria R Squared in restitution for lost earnings. Prosecutors and Ria R Squared claimed they lost 16.26% in revenue on the $14.7 million, but Judge Skavdahl allowed a calculation of 5.5%, which would amount to at least $700,000 that McCown will owe to reimburse.

In a statement on Sunday, Wyoming Catholic College spokesman Joseph Susanka said, “We remain deeply grateful to the many friends and supporters who have supported us through the difficult events of this year because they believe in our mission and in the bright hope of our students. and the supply of graduates. And we hope that McCown’s conviction puts an end to the emotions of the past few months.

“We pray that the Lord will protect his family, and we sincerely hope that his trials in this life will work toward his redemption through Jesus Christ. May we come and forgive him in the spirit of the Lord’s prayer: ‘Forgive us our trespasses, as we forgive those who trespass against us.’