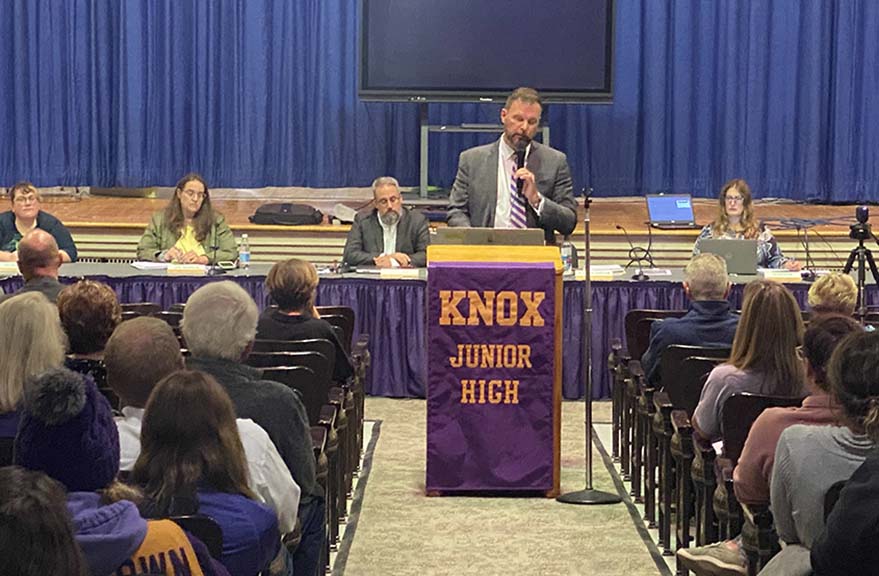 Greater Johnstown School District Superintendent William Crankshaw addressed members of the public Thursday at the school board meeting inside the Knox Building auditorium.

The Greater Johnstown School District School Board listened to more than an hour of impassioned speeches on Thursday night – both against and in favor of a resolution to withdraw from Foothills Council and join the Western Athletic Conference. In the end, the council voted 6 to 1 to “defer indefinitely” the decision – at least until April 30, 2023.

School board vice chair Joyel Richardson was the only member to vote against school board chair David D’Amore’s motion to defer the decision, which was seconded by board member Arthur Schrum Jr. .

Ahead of the vote, D’Amore read a lengthy written statement lamenting the dispute that has split community members into two camps, those in favor of moving to the WAC, where Johnstown sports teams would face size school teams similarly, and supporters of Johnstown’s legendary Lady Bills field hockey team, which has consistently topped Foothills Council for decades despite the district’s dwindling student population.

“With this recommendation alone, we have triggered a fault line that has lurked just below the surface of our daily lives, touching on issues of entrenched notions of socio-economic class, opportunity, preference, identity and ownership,” D’Amore said. “It’s there. It’s talked about at dinner parties and on the sidelines, usually among trusted close friends, but it’s never out in the open to be scrutinized and tested against data and debate.

D’Amore said he supports the move to WAC and thinks more than a few school board members agree with the move, but he acknowledges the concerns of parents, students and alumni in the district who want to s ensuring that the field hockey program and its immense success will continue into the future.

“Based on my conversations with each member of the board, I’m not confident that we have a clear vision or consensus on where we’re headed, and that’s too big an issue to be decided by one person. narrow margin right now,” D’Amore said. . “I recommend postponing this issue indefinitely, setting a deadline of April 30, 2023, and pursuing all necessary research and outreach to ensure the best outcome for all. This will allow our administration time to answer our questions, facilitate dialogue, mend fences and get phones working to ensure a better outcome.

D’Amore also recommended that the board create a “shared decision-making team,” made up of board members, school administration, coaches, parents and students to study all the potential ramifications of any Council’s future decision to leave Foothills Council.

Reports of Putin’s troubles are mounting