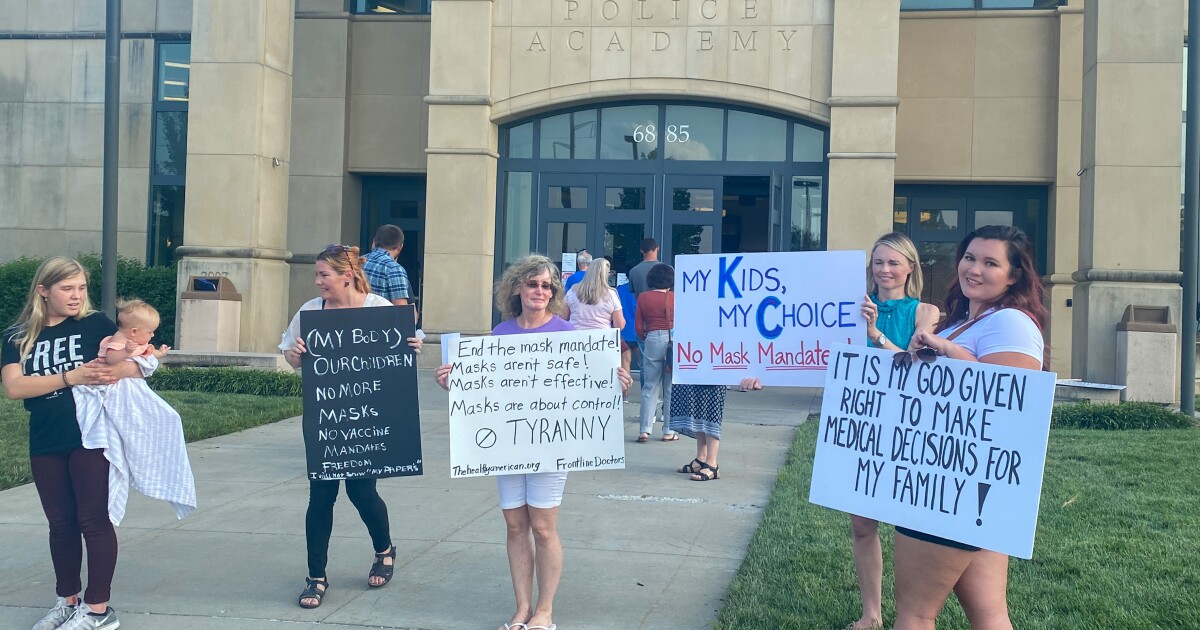 Kansas citizens could be required to mask themselves until the end of September when a new city ordinance is passed.

The city council’s transport, infrastructure and operations committee voted unanimously to extend its current order of indoor masks until September 23 on Wednesday night amid an outcry from audiences. The entire council is due to vote on the measure on Thursday.

The mandate requires people aged 5 and over to wear masks indoors in public places, whether or not they have been vaccinated. The initial order was scheduled to end on August 28.

Dozens of protesters lined up outside the Kansas City Regional Police Academy and reluctantly disguised themselves to enter Wednesday night’s meeting. However, the masks did not appear to be applied once members of the public entered the auditorium.

Passionate residents spoke out against the mask’s warrant for nearly two hours during the public comment portion of the meeting.

â€œWe are 18 months away from this. We have lived with it. We know what the health risks are. You insult the intellectual capacity of the citizens of Kansas by continuing to serve in office. We don’t need warrants, â€Kansas City resident Heath Wessling said.

The speakers were greeted with applause and standing ovations from a vocal audience. Many speakers claimed the city’s mandate was overbearing by the government and spoke out against the effectiveness of masking. Others have played down the risks of COVID-19.

Members of the crowd also heckled Frank Thompson, acting director of the city’s health department, during his presentation to the committee.

The new prescription notes that Kansas City’s weekly average for new COVID-19 cases is the highest in nearly six months, and that local hospitals are approaching capacity.

Thompson stressed the need to increase vaccinations as the delta variant increases COVID cases in the region.

â€œOne of the things that would really help us get out of this pandemic would be meeting the 70% immunization targetâ€¦ we’ve got a long way to go to get there,â€ Thompson said.

Kansas City’s vaccination rate stood at 41% as of Aug. 17. Thompson said the department now estimates the city will meet its target by December.

Other speakers discussed concerns about hiding children, the impacts of the warrants on small businesses and the proposed penalties included in the ordinance.

Those who fail to comply with the order could face the standard penalty for violating a city ordinance – a fine of at least $ 25 and no more than $ 500, or jail time of at least. one day.

Only one speaker spoke in favor of the mandate and expressed disappointment with the overall tone of the meeting.

“I applaud you Mayor Lucas, the Department of Health and City Council for caring enough about the citizens of Kansas City, for encouraging us to get vaccinated, for encouraging us to wear a mask, and for doing whatever we can to help. protect our health, despite what people believe, â€said Margaret Mosbocher.

Council members abruptly ended the meeting to vote without further discussion after the audience continued to interrupt their attempts to speak.

The movements of the two cities follow a new state law that prevents local governments from issuing public health orders for more than 30 days. Orders can be extended by majority vote of the local governing body.

Missouri Attorney General Eric Schmitt filed a lawsuit earlier this month that seeks to overturn Kansas City’s mask warrant. The lawsuit is virtually identical to a lawsuit he filed in St. Louis County.

A St. Louis judge temporarily blocked that mandate after the St. Louis County Council voted to overturn it. A judge expanded the restraining order Tuesday.

Kansas City’s order to extend his mask tenure will be presented to full city council on Thursday. Lucas said earlier this month that the order had the backing of the council.