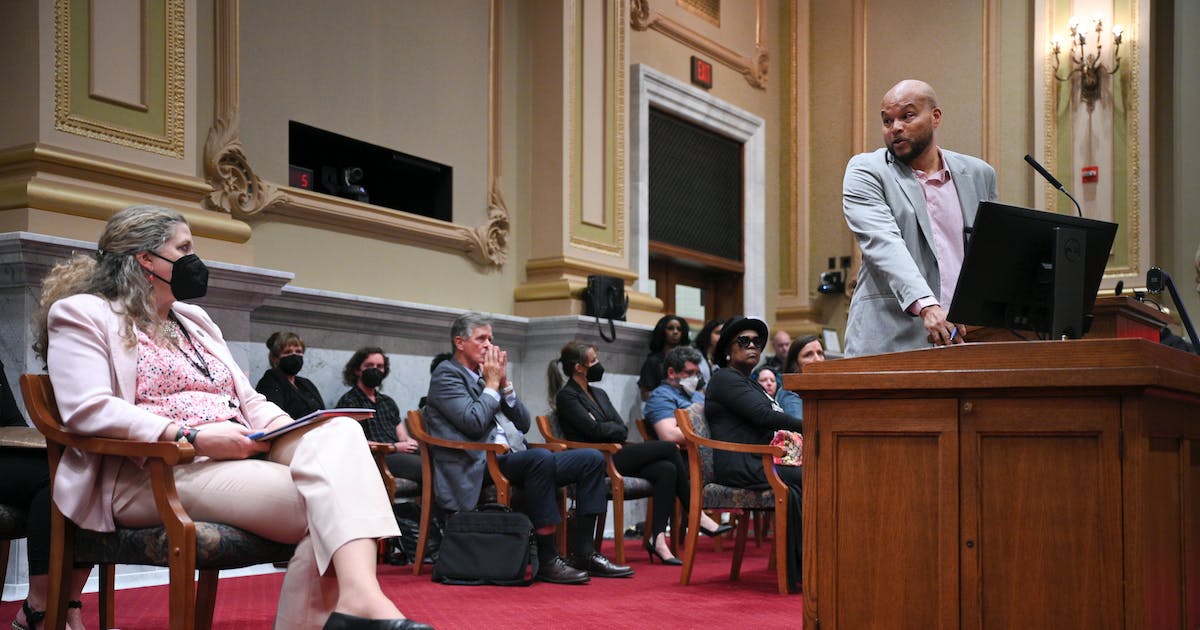 Passionate supporters and opponents of acting city coordinator Heather Johnston gave a Minneapolis council committee a Tuesday before the panel forwards her permanent nomination to the full council.

The Committee of the Whole’s 8-4 vote sent the nomination to the board without a recommendation. The move follows nearly two hours of testimony, including appeals from a group of former and current city employees asking them to reject Johnston’s nomination. They say she failed to address their concerns about discrimination and a “toxic” work culture.

“Some of your testimonies have been difficult to receive, and I think we need a few days to really sit down with this testimony,” Council Vice President Linea Palmisano said. “It’s not a positive or negative recommendation.”

Johnston’s supporters included former and current colleagues, including former mayor RT Rybak and the mayor of Chanhassen. They described Johnston as a tough but approachable and trustworthy leader who works across departments.

The full board could vote on Johnston’s nomination Thursday. If approved, Johnston will be the third person to serve as city coordinator in the past four years.

Johnston has served as acting city coordinator since August. Mayor Jacob Frey nominated her for a permanent position earlier this month.

Shortly after Frey announced the nomination, a group of current and former employees of the Minneapolis City Coordinator’s office sent a letter to the mayor and council, asking them not to select Johnston. They said the department had a history of “toxic, racist and dangerous working conditions” and that Johnston had not done enough to stop him in his acting role.

The group wrote that the city failed to provide enough support to black employees after police killings and other traumatic events in the community. They said they hadn’t had enough opportunities to work remotely to minimize exposure to COVID-19 and microaggressions from the public and co-workers in the city, and that they felt rejected. and disrespectful when raising concerns about government operations.

At a morning press conference and public hearing, the group reiterated the message and said it had forwarded its discrimination complaints to the Minnesota Department of Human Rights to initiate an investigation and obtain protecting employees who speak out.

“Heather systematically and intentionally chose not to listen to our complaints of discrimination and directly harmed black staff,” said Gina Obiri, who works as a program manager in the city coordinator’s office. “A vote to uphold Heather is a vote to deny our humanity and our dignity.”

Johnston’s supporters praised his budget chops and his courage to work under difficult circumstances.

“This town is in considerably better financial shape today than it was a decade ago. And there are many reasons for that, but one of the really big reasons is actually Heather Johnston,” Rybak said during of the hearing.

Johnston previously worked as the city’s budget manager and acting chief financial officer, and held positions in Burnsville and Chanhassen and at state and federal agencies.

On Tuesday, Johnston addressed the public for the first time since the allegations surfaced. She said she is committed to continuing to work to help change the racism that permeates the city’s systems and to developing “an inclusive, innovative, anti-racist, and equitable culture for all of our employees.”

“Culture change takes time and cannot be done by one person,” Johnston said, repeatedly noting that she was not going to retaliate against employees who spoke out.

“I believe the best way to tackle the difficult issues facing the city is to work together, learn from our mistakes, build trust and create a better Minneapolis even with the hard work ahead of us. “, she said.

In Minneapolis, the city coordinator is one of the highest, unelected positions and serves as an advisor to the mayor and city council. About 40 employees work in the office, but hundreds of employees work in additional divisions that also report to the city coordinator, such as communications, emergency management, human resources and finance. The position comes with a salary ranging from $182,111 to $228,774 and has seen a high turnover rate in recent years.

Johnston has led the department on an interim basis since August, following the resignation of Mark Ruff. In early May, Frey appointed her to the permanent position until 2025.

Asked how the search for the city coordinator was conducted, Frey’s office said there was no formal search process, although the mayor had “informal discussions regarding other candidates for the post”.

During her 10 months as acting city coordinator, Frey “has been impressed with Johnston’s leadership, character and commitment to her team,” said Katie Lauer, a spokeswoman for the mayor’s office.

At the public hearing, the group and others slammed the mayor, saying he failed to conduct a ‘transparent and fairness-focused’ recruitment process for the city’s top job. and that there were few colored leaders in the highest positions. In Minneapolis, three in 10 department heads are people of color, according to the mayor’s office.

In a previous interview with the Star Tribune, Frey praised Johnston for his efforts to rebuild the city’s race and equity division, help manage a variety of labor issues and coordinate departments during the implementation. place of the new government structure approved by voters in November.

On Tuesday, the mayor urged members of council to be reasonable and fair, noting that “the tough issues we face are bigger than Heather, and certainly bigger than any person would be able to handle in the nine months. about that she’s been in this active role.”

Some council members disagreed and questioned the legality of moving forward with Johnston’s appointment amid the city’s review of the allegations and a possible Department of Justice investigation. human rights.

“I don’t even understand why we’re even having this conversation,” council member Robin Wonsley Worlobah said. She urged the council and the mayor to delay Johnston’s nomination until the investigation is complete.

Wonsley Worlobah and board members Elliott Payne and Jason Chavez wept during the board meeting, saying the employees’ testimony touched them.

“I’m going to watch like a hawk so that the day you arrive five minutes late, you don’t get fired for that,” Chavez said. “I was going to vote yes to this nomination, but I’m not doing that anymore.”

Sentencing of Josh Duggar will take place on Wednesday