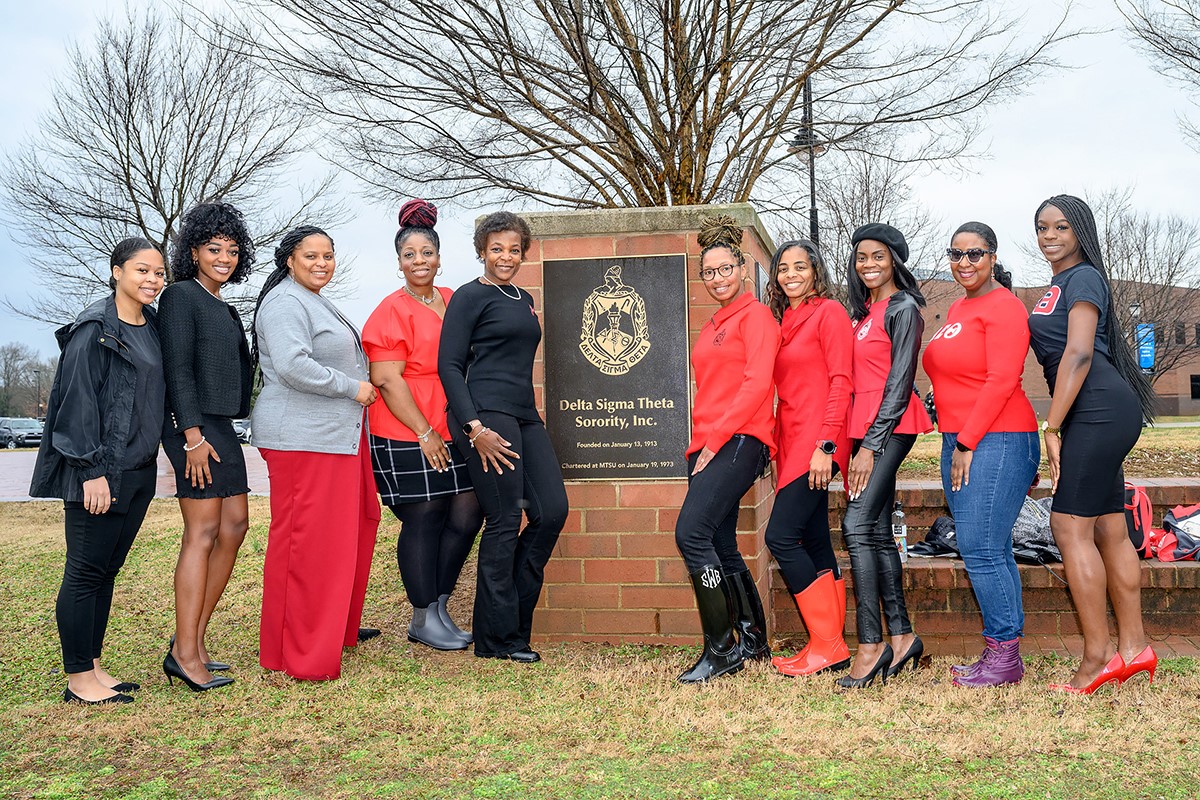 Before an audience of fraternity and sorority members dressed in the respective colors of their groups, university and group officials dedicated the plaques on February 17 in a ceremony at the Student Union.

These groups, along with Alpha Phi Alpha and Iota Phi Theta fraternities, represent the nationally recognized “Divine 9” historically black fraternities and sororities. In December, 10 plaques measuring 2 feet by 3 feet each were installed on the Student Union Commons, one for each of the “Divine 9” and the tenth to represent the NPHC on campus.

MTSU President Sidney A. McPhee, a member of Phi Beta Sigma, celebrated the Greek groups’ legacy of student leadership and cited the ways they have contributed to campus life over the years.

“Some examples include donating needed items and funds to local and national causes, educating MTSU students on societal topics for cultural awareness, community service projects to support Murfreesboro and Rutherford County , sponsorship of scholarships to help and provide financial assistance to students and many other very worthwhile projects,” said McPhee.

Reverend Deborah Smith Owens, an MTSU alumnus and member of the Eta Psi Chapter of Alpha Kappa Alpha, recalled the origins of black fraternities and sororities at the university half a century earlier.

“Although we were divided by names of fraternity and sorority, we all had a common goal – to improve the quality of life for ourselves, for our community and for the world, as well as for Greek life on this campus” , said Owens.

“We must continue to fight for our community in this school, in this city, in this state and in this country,” said Everett, a young exercise science student from Portland, Tennessee.

“As students, we have to be ready to get to work. Our black leaders are aging. It’s our time…to step out of the fringes and use our voice as young leaders to bring about the changes we want to see in our communities.

Everett gave special thanks to McPhee and Debra Sells, vice president of student affairs, for their support in making the plaque dedication possible.

Leslie Merritt, director of Fraternity and Sisterhood Life, applauded all NPHC students, past and present, for their support, as well as the Center for Student Involvement and Leadership and the Student Government Association, who adopted a bill in favor of the project.

“I started this work in 2016 and we discussed how to recognize the importance of the NPHC in a physical way on campus,” Merritt said. “And yet I know that the discussions did not start then, but had been discussed for decades before. Thank you to everyone who participated in these conversations and helped this project to come to fruition.

For more information about NPHC fraternities and sororities, contact Merritt at 615-898-5812 or [email protected]

Dental nurse took £70,000 from elderly aunt who was needed for care payments