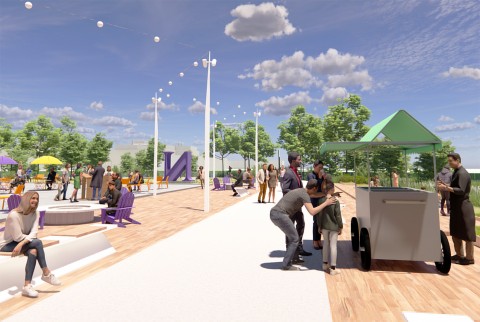 “I spent a lot of time at Norris University Center as an undergraduate and recognize the importance of creating an open space for the community to collaborate, study, or just have fun and relax,” said said Frank Cohen, Global Head of Core + Real Estate at Blackstone and President and CEO of Blackstone Real Estate Investment Trust.

A Northwestern alumnus and active volunteer, Frank earned his bachelor’s degree in the Honors Mathematical Methods in Social Sciences program with a double major in Political Science from Weinberg College of Arts and Sciences in 1995. He received a Northwestern Alumni Service Award. Association in 2014. In addition to his role on the Board of Trustees, he serves on the New York Regional Council of the Northwestern University Leadership Council (NULC) and the Weinberg College Board of Visitors and chairs the Kellogg’s Real Estate Advisory Board. School of Management.

The Cohens’ latest pledge brings their total giving to Northwestern to more than $6 million, including support for Weinberg College, the Division of Student Affairs, Northwestern Athletics and Recreation and Kellogg. The couple, who have given annually for 25 years, are also members of NU Loyal, the giving society that recognizes donors who support the University each year.

Julie Cohen received her bachelor’s degree from The Ohio State University. The Cohens reside in Short Hills, New Jersey, with their three children.

“We are grateful for the wonderful education our daughter is receiving, and we want to support the University’s efforts to provide additional places for students to congregate,” said Ken and Jana Kahn.

The Kahns, who are also members of NU Loyalty, are active supporters of the School of Education and Social Policy (SESP) and student affairs at Northwestern. The proud parents of Alexandra Kahn ’25, a current SESP student, live in Palm Beach Gardens, Florida.