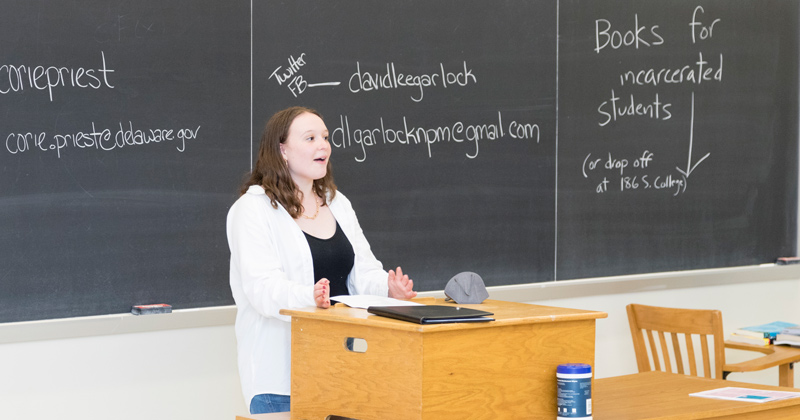 Maggie Buckridge, a senior at the University of Delaware, recently read what’s called an I-Poem to an audience in a campus classroom, sharing her research on the justice system and the reintegration of ex-prisoners into the community. in a new way.

Buckridge is a member of a research team led by Chrysanthi Leon, an associate professor of sociology and criminal justice, women’s and gender studies, and legal studies. The team’s work encompasses such difficult topics as crime, law, gender and justice – from the experiences of sex workers to controversies over prison reform.

“Issues I research are often difficult to understand, unpopular, convoluted, dense, and generally difficult to access or be heard,” Leon said. Professor Chrysanthi Leon talks about her work on crime and justice issues and the use of I-Poems to tell the stories of research participants.

But because she knows it’s important for the wider community, beyond academics and policymakers, to hear about this work, her team uses poetry to make their qualitative research accessible. They turned hundreds of hours of interviews and focus group transcripts into I-Poems, using participants’ own words to share their experiences.

Each line of the poem begins with “I” and is taken exclusively from the research transcriptions and constructed into its final poetic form.

“Developing these poems helped us understand a variety of diverse perspectives and experiences,” according to the I-Poem Project website. “We hope that reading the I-Poems will similarly shape your understanding of the beliefs and lives of our participants.”

A poem from the project begins: “I have been changed; I was sexually abused; I retaliated; I protected myself. Later, he continues: “I was condemned; I have found grace; I received an education; I came out; I gave back; I educated; I reformed; I changed; I fight for reform for all.

The poem concludes: “I have rehabilitated; I returned; I was a criminal; I broke the trauma of the prison pipeline; I succeed.

At the public event held at UD’s Memorial Hall on April 26, the public heard several more examples of I-Poems, then spoke with two guest speakers who told their own stories. on reintegration into the community after serving prison sentences. David Garlock is an advocate for prison reform, particularly the need to better prepare inmates for release by providing educational and other services throughout their incarceration.

“How many years of school did you have before going to university?” Was it more than three months? David Garlock asked the students in the audience.

Garlock, who served 13 years of a murder sentence for killing the person who abused him, went on to tell the students that, of course, 12 years of education is considered necessary to prepare for the university.

He compared this with the brief period that most prisons devote to preparing an inmate for release. Instead of waiting a month or two before release — and most inmates will indeed be released at some point, he noted — the process of reintegration preparation should start very early in the prison sentence. a person, he said.

“We need better programming” in prisons, to provide educational opportunities and to help inmates deal with their own trauma and find the resources they need, Garlock said. “We need advisers who are actually there to help people.”

Garlock, who was featured in the film just mercywas paroled in 2013, earned his bachelor’s degree, and now works with the New Person Ministries Reentry Program and as a member of the Pennsylvania Reentry Council. Corie Priest, community engagement specialist with the Delaware Department of Justice, talks about her own experiences in prison and reintegrating into the community after her release.

Drawing on his experience serving time in prison for trafficking marijuana, Priest said he works to help connect those in need to community resources. Many are ex-convicts struggling with substance abuse or mental health issues.

“In prison [after serving two years, he was released in 2009], I found a lot of smart, funny, talented people,” Priest said, adding that many just needed help with the reintegration process. In his case, he said, he made the experience of being incarcerated “determined” by taking classes and expanding his awareness of the world.

“We need more people with these experiences to help reform the criminal justice system,” he said.

About I-Poèmes and back to school

The event at UD, titled “Prison Re-entry: Conversation, Poetry and Action,” was sponsored by the Honors College, Department of Sociology and Criminal Justice and the Lattice Project, a registered student organization.

Leon, who is Associate Dean of the Honors College, is a founding member of the Center for the Study and Prevention of Gender-Based Violence at UD. She is an interdisciplinary scholar in penology, law and society whose research and teaching focus on sex crimes and punishment, sex work and the prison system; she teaches at a local women’s prison.

Man sentenced to life in prison for sex trafficking a minor