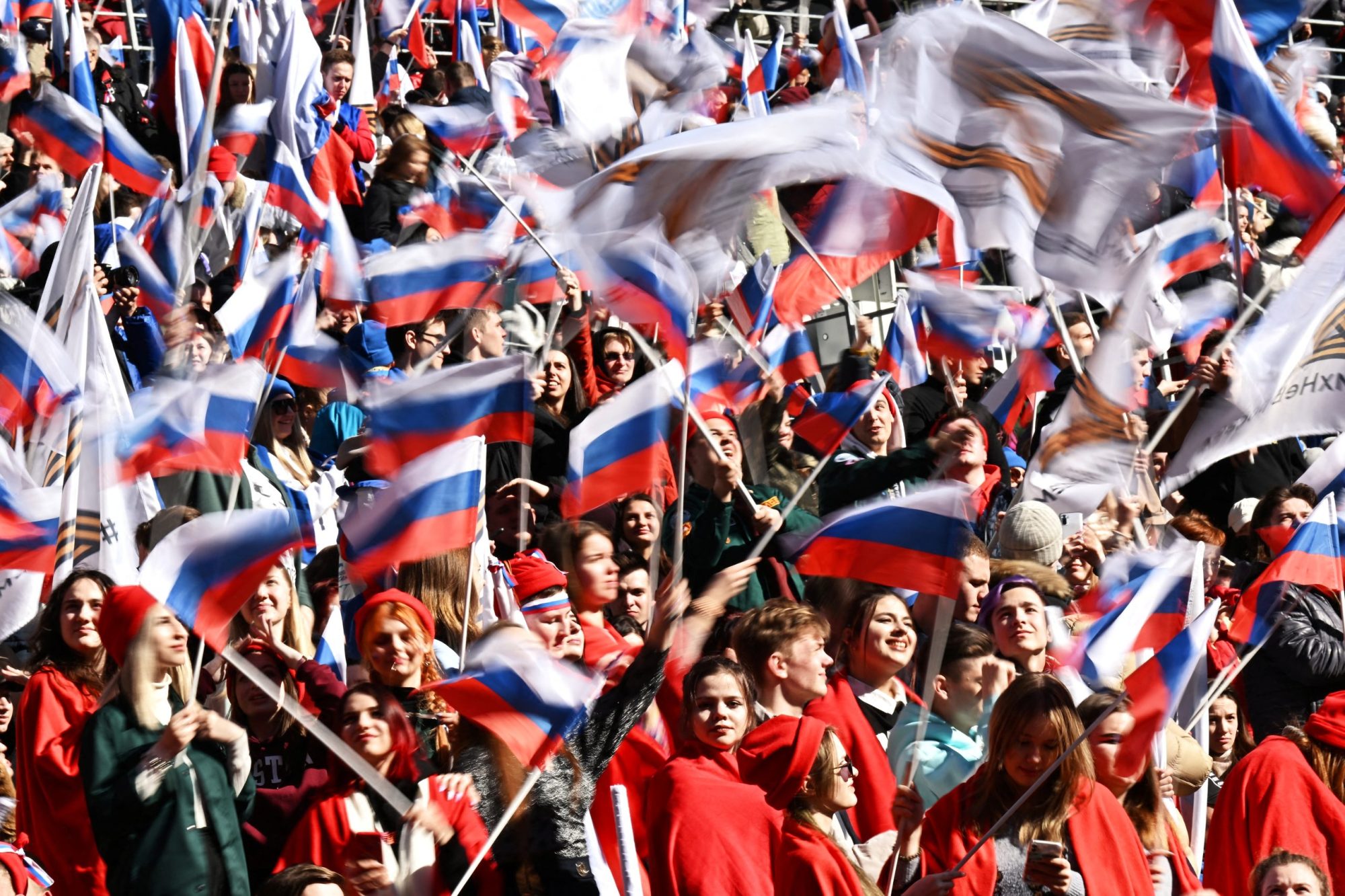 Vladimir Putin’s Ukraine War does not go as planned, with Ukrainian forces repelling attempts to capture kyiv and forcing a general Russian retreat from the north of the country. Nevertheless, the end of hostilities is still not in sight, everything indicates that Moscow is preparing for a long campaign. As the Russian military launches a new offensive in eastern Ukraine, the Kremlin is accelerating its efforts to indoctrinate young Russians and cement pro-war consensus on the home front for a new generation.

Videos and photos are now emerging across the country of young Russians showing their support for the invasion of Ukraine. Many children and teens featured in this pro-war content display the “Z” symbol which became iconic of the war after it was adopted as a marker by the invading Russian force.

This emphasis on youth is no accident. This reflects concerns within the Kremlin that young, internet-savvy Russians are more resistant to state propaganda and have the knowledge to access censored information online. The emerging generation is also more likely to have a favorable view of Europe and the United States than older Russians who continue to get most of their information from Putin’s propaganda networks.

This caution is easy to understand, especially given the prominence of students and teenagers during a wave of protests that took place in the first weeks of the invasion. However, those protests have since died down amid indications that the government’s bullying tactics are proving effective. The Kremlin has encouraged Russians to rally behind the flag by portraying the war as an existential struggle between Russia and the West. Meanwhile, anti-war messages were denounced as unpatriotic and anti-Russian.

The Kremlin’s polarizing “them and us” framing of the war has been amplified by Putin himself, who has called for a “self-cleansing of society” of “scum and traitors”. This fuels aggression against anyone who finds themselves on the wrong side of their dichotomy. In a recent incident, the door of a young investigative journalist in Moscow was the target of graffiti declaring her a traitor. A young activist who went viral for reading the Russian constitution to riot police during protests in 2019 also recently found graffiti on her door saying “Don’t sell your homeland, bitch.” In both cases, the threatening messages were accompanied by a “Z”.

Faced with the growing risk of political violence and bleak economic prospects, tens of thousands of mostly young Russians are now fleeing the country to places like Turkey, Central Asia and the South Caucasus. Since the start of the war on February 24, some estimates put the overall figure for this exodus at around 200,000 people. This includes many of the more progressive elements of Russian society, such as freelance journalists and tech professionals.

As the Russian crisis in Eastern Europe escalates, UkraineAlert DAILY delivers the best advice from experts from the Atlantic Council, the online publication UkraineAlert and beyond, to your inbox Monday through friday.

As opposition to the war among young Russians is largely brushed aside or silenced, the Kremlin is stepping up its long campaign to give Russian children a “patriotic education” designed to secure their loyalty and shape their future ideological outlook.

Nearly a decade ago, Putin called on Russian historians to develop a new history curriculum free from “internal contradictions and ambiguities.” The resulting revisionist version of history included efforts to rehabilitate Josef Stalin’s personal reputation and promote the positive aspects of the Soviet era while emphasizing the role of the USSR in the victory over Nazi Germany.

Efforts continue to align classroom instruction with Kremlin thinking. Recent additions to the program have included documents justifying aggression against Ukraine. In Murmansk, schools were urged to include new material outlining Ukraine’s “genocide against Russians” and the country’s supposed “anti-Russian path”. The teaching materials claim that Ukraine is a Nazi-friendly country controlled by the West.

In late March 2022, Russian kindergartens and schools began sharing posts showing their students working in support of the country’s “special military operation” in Ukraine. Children had to write letters on the front with designs of military symbols such as ribbons, carnations, the Russian flag and the now ubiquitous “Z”. At a school in Kaliningrad, children learned a new patriotic song redrawing Russia’s borders and featuring the lyrics: “From Donetsk to the Kremlin, from Lugansk to the Kremlin, from Alaska to the Kremlin, this is my homeland”.

Politicized classrooms can have a profound long-term impact on children. Because of their generally narrow social circle, their dependence on elders and authority figures, and their limited knowledge of history and current affairs, children are particularly vulnerable to the type of indoctrination which is currently taking place in schools across Russia.

Similar processes are also underway outside the Russian education system. For example, the Murmansk Youth Committee recently made headlines by mobilizing young people for rallies and propaganda videos. These mobilizations have included the involvement of the Murmansk-based Northern Fleet, which is a source of considerable local prestige and pride.

Many recent pro-war events with the participation of young Russians have also relied heavily on the Russian Youth Army, an organization created in 2015 by Russian Defense Minister Sergei Shoigu to train future military personnel. In recent weeks, Ukrainian intelligence sources have accused Russia of preparing to conscript underage children from the movement to help replenish mounting casualties in the ongoing war.

Critics fear that public displays of pro-war militarism could help radicalize a new generation of Russians and lead to the kind of bigotry seen during the darkest days of the Soviet era, which saw campaigns encouraging children to denounce their own parents. There are already signs that such tendencies are reappearing in Russian society. When a Russian teacher recently mentioned to students that she thought the invasion of Ukraine was a “mistake”, a student secretly taped the exchange and reported her to the authorities. The teacher was fined 30,000 rubles and lost her job.

The next big date to watch is May 9, as the Kremlin prepares for its annual World War II Victory Day celebrations. Given Russia’s efforts to frame the invasion of Ukraine as a continuation of the heroic struggle against fascism, this national holiday is likely to be the biggest pro-war event since hostilities broke out in late February. Authorities will seek to enlist as many young Russians as possible and aim to use the strong emotional boost of the victory over Hitler to help legitimize the current war effort in Ukraine.

Although it is difficult to gauge exactly how effective the Kremlin’s efforts to foster pro-war sentiment among young Russians are, the available data suggests considerable success. A March 31 survey by Russia’s leading independent pollster, the Levada Center, found that 71% of 18-24 year olds supported the war, just 10% below the national average for all age groups. Meanwhile, a more recent Levada Center survey found that 54% of 18-24 year olds held negative attitudes towards Ukraine, compared to an average of 57% among all respondents.

There is a real danger that the wave of bigotry unleashed by the invasion of Ukraine will create a new generation of radicalized young Russians who enthusiastically embrace the toxic brand of militarism and extreme nationalism promoted by the Kremlin. This could prolong the current confrontation between Russia and the West for many decades to come, leading to the pursuit of Putin long after Putin himself has left the world stage.

Doug Klain is Deputy Director at the Atlantic Council’s Eurasia Center in Washington, DC. Find him on Twitter @DougKlain.

The opinions expressed in UkraineAlert are solely those of the authors and do not necessarily reflect the opinions of the Atlantic Council, its staff or its supporters.

the Eurasia Center mission is to strengthen transatlantic cooperation in promoting stability, democratic values ​​and prosperity in Eurasia, from Eastern Europe and Turkey in the West to the Caucasus, Russia and the Central Asia to the East.

Follow us on social networks
and support our work