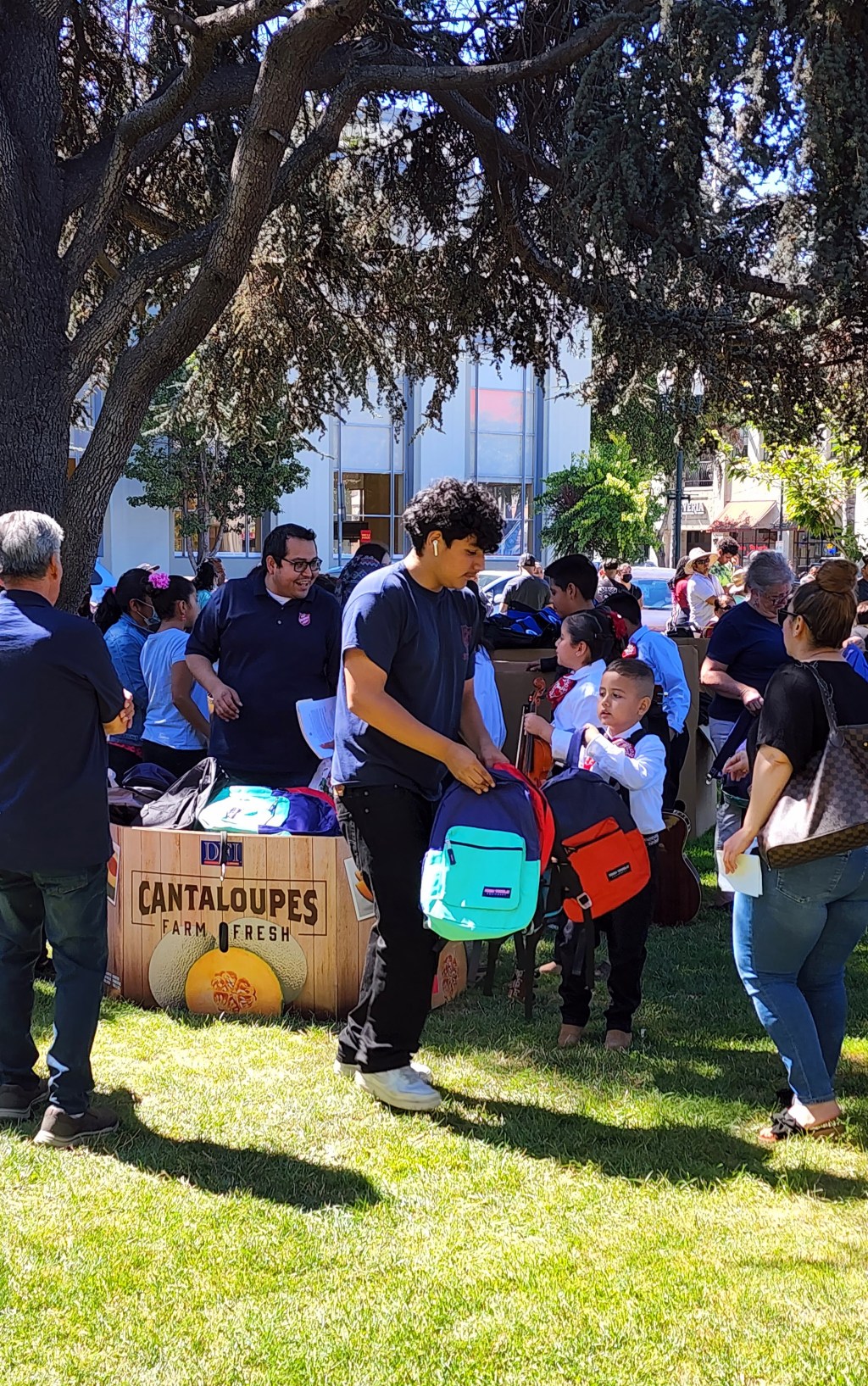 WATSONVILLE — More than a hundred families lined up around Watsonville City Plaza on Saturday for free backpacks, school supplies, food, games and live music. The backpack distribution event was coordinated by The Salvation Army of Watsonville and hosted by Salvation Army Lt. Nayeli Mercado.

“I’m so happy to have this opportunity to serve people,” Mercado said. “And I think if parents need to come and pick up a backpack for school, they need a lot more than that, and that’s what The Salvation Army is really about – not just providing a backpack to backpack, but provide a good time and provide assistance.”

Mercado emphasized that the campaign would not have been possible without the many volunteers, donors and partner organizations such as the Rotary Club of Freedom, the Community Action Board of Santa Cruz County, the Pajaro Valley Unified School District, the Departments of Fire and Police in Watsonville, Pajaro Valley. Arts Council and Red Cross. Donations also came from Staples, A2i Accounting Consulting Services and Corralitos Feed and Pet Supplies, among others. About 300 backpacks were distributed on Saturday, along with school supplies, clothes, food and ice cream.

“I’m really excited that we’re able to provide these supplies as school starts next week,” said Trina Coffman-Gomez, Salvation Army board member, president of the Pajaro Valley Arts Council. and president of the Rotary Club of Freedom. “I want this to become an event of the year that we can really be proud of.”

Around the plaza, parents lined up while children feasted on ice cream and played in the shady grass of the plaza, accompanied by traditional Mexican music and celebrity appearances from Nintendo characters Mario and Luigi. For local adults such as Daniel Villamar of the Watsonville Salvation Army, who also helped organize the giveaway, the event stirred feelings of nostalgia.

“I remember being a kid and taking a backpack,” Villamar said. “Now I was the one helping get the backpacks and I saw the effort that went into getting good supplies. I think the kids are going to be happy with what they have today .

Villamar mentioned that the Salvation Army bought a bike for the raffle, but it was stolen. When they heard of the theft, local businesses Tri-County Real Estate and Aldina Real Estate donated five bikes for the event. In five of the 300 backpacks distributed, there was a piece of paper that declared the lucky new owner of the backpack, winner of a new bicycle.

“I think it’s good that they’re helping people,” said Yahaira De La Torre, 15, of Watsonville. “It shows that the community really cares about each other.”

Other older children such as Yahaira seemed to have a deeper understanding of what driving meant to the community outside of free ice cream and school swag, such as 16-year-old Marco Nico and 14-year-old Jenny Rocha. both of Watsonville.

“I think it’s cool that we have an event like this so people without a lot of money can get supplies for the upcoming school year,” Marco said.

“It’s a really good thing to have something like this so people in the community can hang out and get to know each other,” said 14-year-old Watsonville resident Jenny Rocha.

And for mother Maria Ramirez, who stood with her daughters, Noemi and Dulce Frias, after receiving their new backpacks, the event was clearly not just about school supplies.

“I’m so grateful to the people who organized this,” said Maria Ramirez. “And I’m grateful for the backpacks and all the help given to the community.”