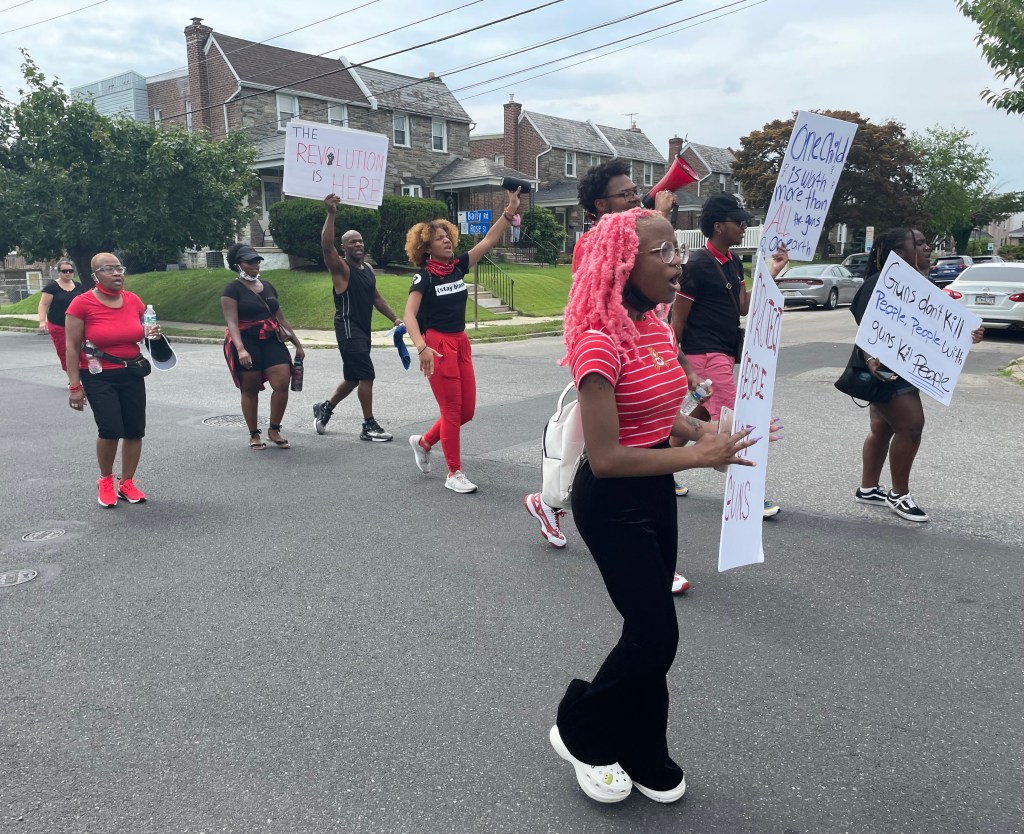 Called #NoMoreHashtags Protest, the event reflected the path taken in 2020 when 1,000 people marched from Lansdowne to Yeadon following the murder of George Floyd advocating for Black Lives Matter. The 2020 march was also organized by Monroe, then a student at Penn Wood High School.

As in 2020, they were escorted by the police of the two municipalities throughout the course.

“We wanted to not only raise awareness, but use this as a call to action,” Policard said. “Everyone is always aware of what is going on, but they don’t have the chance to step in and do our part. So we wanted to use this as an opportunity to inspire people to step up and see what they can do for their own community.

“We really wanted to do something that would bring the community together again, like we did two years ago, just so we all know we’re all in this together,” she said.

Isaiah Capitol, owner of Capitol Security Solutions, was so inspired when the group walked past him that he joined the dozen walkers.

I actually happened to see them go by and (thought) ‘Man, I’m so moved by this,'” he said. “I stopped what I was doing and grabbed a sign and said, ‘Here, let me wear this for you.’ It’s incredible.”

At the end of the event at Kerr Field in Yeadon, he shared his thoughts with the group.

“You have a pond,” he said. “You have such a big rock. It makes a ripple. You make this water big enough, it becomes a tidal wave… Keep it up. Continue like that.”

Participant Kim Hayes agreed, adding that she was motivated by her daughter, Trinity, to walk.

“I’m so proud of you young adults and what you’re trying to do,” she said. “It doesn’t matter the size. You involved the police to help us stop traffic miles back. People were beeping. People were looking. Some people stopped. A gentleman came to join us. It works whether you are five or 100. So be encouraged and keep pushing forward.

Trinity Hayes works on South Street near where the mass shooting that killed two people and injured nearly a dozen others took place last month.

Along with the march, participants signed a banner that will be sent to the White House.

Messages include: “No more violence. End gun violence NOW! ; “We can’t have another one!”; and “Strict gun laws keep us safe!”

“We’re going to send this to President Joe Biden because he needs to know this community is over,” Monroe said. “We’re done with everything that’s going on — in Philadelphia, in Uvalde, in Buffalo. had finished.”

Policard offered suggestions for keeping the momentum going for those interested, including being active in the community and reaching out to all your elected officials.

And, thirdly, he said, “Vote, vote, vote, vote and I repeat – vote. And, I’m not just talking about your president. I mean for your senator and council members. If this should affect you, vote.

Dyamond Gibbs, co-founder and president of the UDTJ, invited attendees to join a rally for justice at 1 p.m. Monday, July 25 at the Delaware County Courthouse at 201 W. Front St. in Media .

The rally is being held in conjunction with the start of a trial of three former Sharon Hill police officers – Devon Smith, 34, Sean Patrick Dolan, 25 and Brian James Devaney, 41 – each charged with one count of intentional homicide and manslaughter. in Fanta’s death and 10 counts of reckless endangerment.

Gibbs has expressed concern that the charges will be dropped.