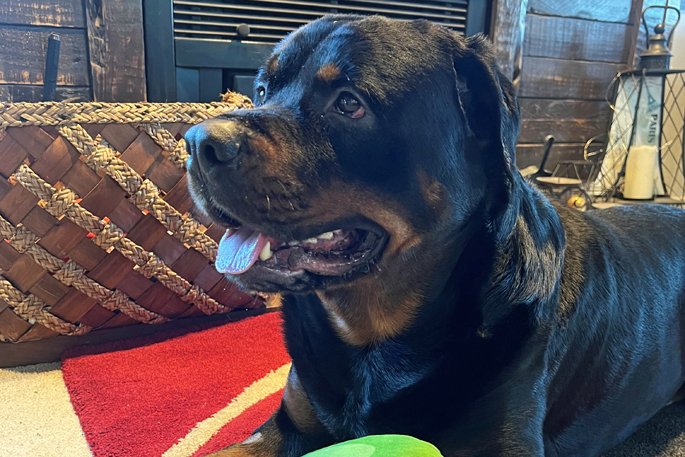 Tauranga Rottweiler Chopper’s life is at risk again as Tauranga City Council appeals the judge’s ruling on his previous charge.

Chopper was released from the pound in July after a charge against his owner Helen Fraser was dismissed by Judge David Cameron.

Fraser was accused by council of owning a dog causing injury, after Chopper bit vet Dr Liza Schneider during an appointment to discuss sexing the dog in October 2021.

The attack left Schneider, the owner of Holistic Vets, with a broken ulna, four puncture wounds, nerve and muscle damage and needed surgery.

If Fraser was found guilty of the charge, that would mean the dog had to be legally put down.

The charge carries a maximum sentence of three years in prison or a fine of $20,000.

At the judge alone trial in June, the dispute was whether Fraser was responsible for the attack.

In his decision, Judge Cameron said Dr Schneider “was responsible for determining how the situation should be handled”.

“She was able to take appropriate steps to maintain and exercise control,” Judge Cameron said.

“She did not, however, take any steps to maintain and exercise control, although she had every opportunity to do so.

“If she had, the incident would have been avoided.

“I consider that Dr. Schneider put herself in a position where she was vulnerable to attack from a dog that had not been assessed for security purposes.”

Tauranga City Council’s environmental regulator, Nigel McGlone, said the council appealed because it believed the judge had “erred in law”.

“He focused on the victim’s conduct, rather than the dog owner’s legal responsibility to control the dog,” McGlone explains.

“Council has sought advice from Crown Law who agree that it is in the public interest to clarify this question of law, as the outcome will have implications for all dog owners.”

Ryan Tarawhiti-Brown when he reunited with Chopper in July. Photo: supplied.

Fraser’s son, Ryan Tarawhiti-Brown, says the family wasn’t surprised by the council’s call because they knew it was still an option.

He describes the council’s appeal as ‘wanting to win at all costs’ and says there were ‘better uses’ of taxpayers’ money than an appeal to the high court.

“We told the truth in court and the judge saw it,” Tarawhiti-Brown says.

He says his mother is “stressed” because of the call and the costs that may be involved, as well as the threat to Chopper’s life.

“It was stressful from the start, but it’s a whole new thing,” he said.

“We just want to get on with our lives. We want to know that all of this is behind us.

“So we don’t have to worry about Chopper being taken from us and Mom doesn’t have to have those fines and jail time on top of her.”

Chopper had been impounded for nine months and unable to leave his kennel. Fraser visited her almost daily during that time, Tarawhiti-Brown says.

Since being home, Chopper has been ‘perfect’ and they have been working with a dog trainer and doing hydrotherapy to help strengthen his back legs.

“I feel like he hasn’t even left. It’s just well integrated.