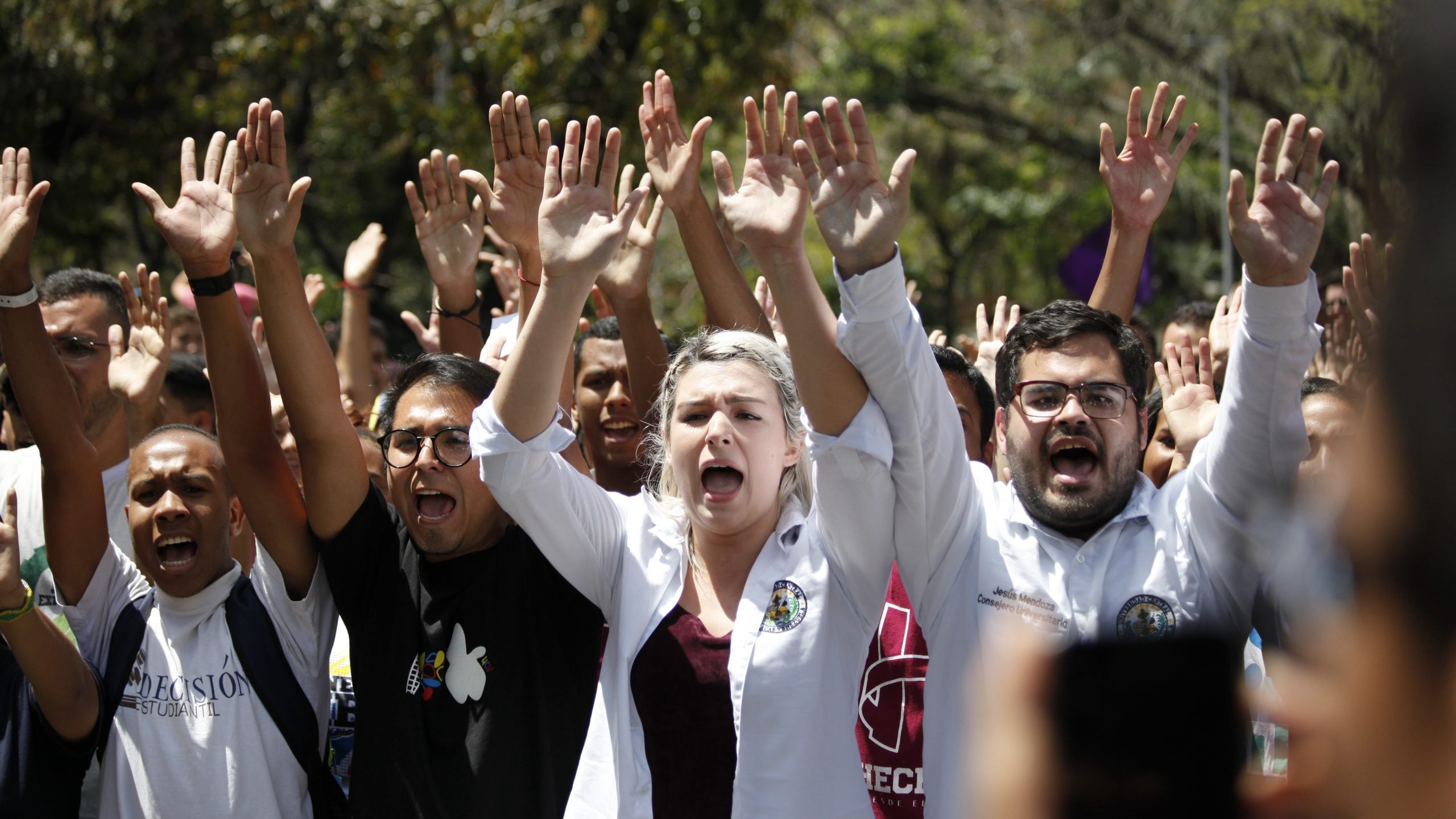 Daily life in Venezuela has long been bleak: Due to mismanagement and corruption, the administration of NicolÃ¡s Maduro fails to provide basic government services and continues to undermine the essence of democracy. Every day, citizens face uncertain access to wages, running water, medical supplies and internet access. Young students, in particular, lack educational and economic opportunities to improve their livelihoods.

An entire generation of Venezuelans has grown up in a failed state, and these citizens will be crucial to the country’s future democracy. But to revitalize it, they must unify a deeply divided country and political system.

Faced with more and more obstacles, the political opposition is struggling to consolidate its message and, frankly, the country. The interim government was weakened by internal fragmentation and repression, and while opposition parties managed to form a coalition to secure a majority in the Venezuelan National Assembly in 2015, they have since lost their focus and momentum. . In 2017, Maduro undermined it by imposing a parallel National Constituent Assembly that illegally took control of legislative powers. Since then, opposition leaders have failed to agree on strategies to achieve a government transition and continue boycotting the elections.

Meanwhile, the Venezuelan population is losing hope in the opposition, as leader Juan GuaidÃ³’s approval rating hovers at 16%, almost the same as Maduro’s.

Debates over the opposition’s strategy will come to a head this week, as the National Assembly’s constitutional mandate is due to expire on January 5, meaning the interim government would be dissolved. Representatives are debating a statute that would grant continuity to the interim government and GuaidÃ³’s legal mandate established in 2015. But opposition leaders are divided on the way forward for the interim government. At such a precarious time, they need a new approach to connect with citizens and respond to the crushing blows the country has suffered over the past eight years.

It also represents the perfect opportunity for US President Joe Biden to follow through on his plans to make democracies more “responsive and resilient,” announced at last month’s Democracy Summit, and to provide meaningful support to a new generation of determined and democratic Venezuelans. .

Unable to wait for increased international support, young Venezuelans meanwhile struggle against the insidious effects of Maduro’s administration by promoting key facets of democracy in their communities. From fighting digital autocracy by creating alternative information channels to facilitating political formations aimed at galvanizing greater youth participation in politics, the next generation of leaders in Venezuela are striving to build a society democratic more resilient.

I reached out to some of them to get a feel for the work they are doing on the ground, as well as how the United States can support them and the democratic revitalization of the country. They are fighting an uphill battle, but one in which the scales are likely to tip in their favor.

Venezuela’s current political crisis is precipitating future instability by destroying opportunities for the next generation. Between 2013 and 2021, the percentage of young Venezuelans between the ages of fifteen and twenty-nine who were neither in school nor at work increased from 23% to 37%, and more than three-quarters of the Venezuelan population now live in extreme poverty. According to the head of the local community Ibsen Medina, of the Venezuelan nonprofit community organization Creemos Sugar, â€œThere is not a sufficient and deeply rooted civic and institutional culture with regard to electionsâ€.

In the face of such obstacles, political apathy would seem to be a reasonable response. The 2021 National Youth Survey of AndrÃ©s Bello Catholic University found that 27.5% of its beneficiaries said they had no preference between democracy and dictatorship, while 22.1% said that they might even prefer an authoritarian regime. It is therefore not surprising that only 42% of the total eligible voters voted in the regional elections in November. Although there is still no definitive data on voter turnout among young people, the non-governmental organization Voto Joven estimates that just 15 percent participated in this exercise.

Yet civil society groups across the country are working to tackle the roots of disinformation and mistrust of democracy within their communities. For example, the ConfederaciÃ³n de Estudiantes de Venezuela (whose leaders I followed) mobilizes young people across the country to fight oppression and increase the visibility of human rights violations. An organization called Crea PaÃ­s increases political participation and combats polarization by educating young people about the political process, creating a coalition more resistant to fragmentation. Joven red Venezuela is working to improve access to voting across the country, and a new project called Voceros Insulares counteract disinformation by sharing verified information in community forums.

Each organization or project focuses on the education and empowerment of Venezuelan society, because as Medina notes: â€œ[A] properly informed citizenship is a driving force that brings about transcendent changes in society.

But Medina also says civil society needs tangible resources to continue training future leaders, providing communities with accurate information and organizing events to build solidarity across the country. SimÃ³n CalderÃ³n, president of the student network AsociaciÃ³n Civil Juventud Insular, explained that grassroots organizations have strong community relationships and bold ideas, but need operational and methodological support to expand their work. By funding civil society efforts, the United States could move from short-term thinking to a more sustainable, long-term approach to Venezuela, with major benefits for democratic longevity and electoral stability in the country.

The Biden administration should support those leaders of Venezuelan civil society who know best how to fortify their institutions against Maduro’s attack on democracy. The fragmentation of the Venezuelan political opposition underscores the need for sustained international support and presents the perfect opportunity for Biden to turn his plans into action.

The administration is committed to making democracies more “responsive and resilient” over the two-day Democracy Summit, and the next twelve months will provide the ultimate test. In conjunction with the summit, Biden announced the â€œPresidential Initiative for Democratic Renewalâ€ which plans to provide $ 424.4 million to strengthen democracy and defend human rights around the world. The U.S. State Department has pledged to announce commitments to upholding free and fair elections and civic capacity building, among other areas, and plans to report on progress at the upcoming Summit for the United Nations. democracy in 2022.

Supporting the work of these grassroots organizations should be a central part of America’s commitments as they embark on the Year of Action following the first summit. The Biden administration can do this by mobilizing funds through the United States Agency for International Development (USAID), the United States Department of State, and multilateral financial institutions, and by strengthening existing funding mechanisms.

The US State Department’s Venezuelan Affairs Unit already provides hard-hitting public diplomacy grants, but is expected to expand its reach and eligibility criteria to include grassroots organizations with limited resources, especially those outside Caracas. USAID’s Powered by the People initiative should devote resources to Venezuela, and all new U.S. government grants should be accompanied by a massive awareness campaign through social media and local universities to ensure that opportunities reach the people. isolated communities through young leaders. Along with this process, the US Congress is expected to work with the Biden administration to raise funds for the Presidential Initiative for Democratic Renewal.

The next generation of Venezuelan leaders will not be able to run on steam, and failure to support these leaders would have catastrophic effects on Venezuela’s future. Venezuelan students who were in primary school when Maduro took power are now of voting age. But if the international community, led by the Biden administration, can rally to it, it could very well get the country out of its crisis by starting from local issues to build a national movement that reinforces the value of freedom of expression, political pluralism. , and the rule of law. Following its Democracy Summit, the Biden administration has its year of action to implement its proclamations – and young Venezuelan leaders can guide the next steps.

Willow Fortunoff is Project Assistant at the Adrienne Arsht Latin America Center at the Atlantic Council.

There is no policy of mass infection, insists COVID tsar amid PM’s grim predictions