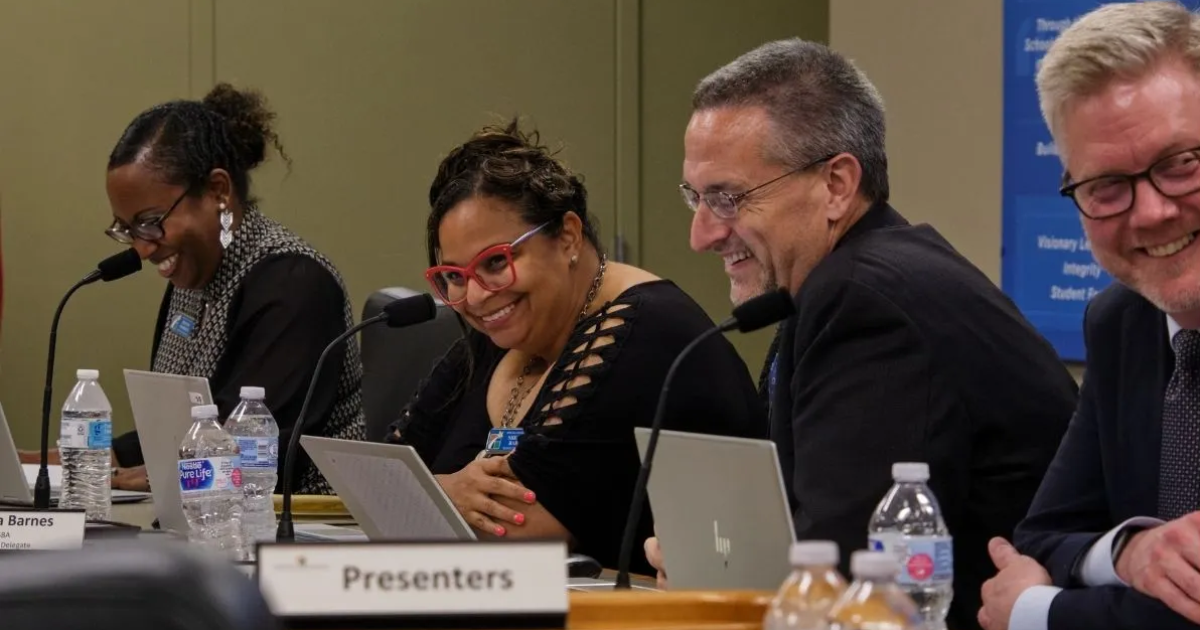 ‘We need to pull ourselves together’: New Park Hill School Board wants to focus on equity and inclusion | KCUR 89.3

As a junior at Park Hill High School, Shereka Barnes was turned down for a role in a play. She said her drama teacher told her the school couldn’t handle the controversy of a black girl kissing a white boy.

Now, 30 years later, Barnes serves on the school board for the Park Hill School District – one of two new members elected in April.

But the acting teacher’s comments stuck with her. Her two daughters – now at university – have also experienced incidents of bias at Park Hill schools.

Barnes’ history with the district has convinced her that her racial justice issues go far deeper than the recent headline-grabbing incidents.

“Everybody wants to act like a lot of the stuff that’s happening now is new, but I think the difference is it’s just (on) social media and more recorded,” she said.

But Barnes hasn’t given up on Park Hill’s potential, and there are signs the district is gaining momentum around equity and inclusion.

“Current events in society, in our country and in our community have definitely proven to us that we still have work to do,” said Terri Deayon, director of access, inclusion and family engagement. of the district. “But it’s encouraging to see our work and the things we’ve done this year starting to take shape.”

Barnes and Daryl Terwilleger, the other newly elected school board member, have both highlighted issues of diversity and belonging in their campaigns. They each obtained more than 22% of the votes, ahead of the other six candidates.

Terwilleger declined an interview for this story.

Educating the Park Hill School Community to Help Not Hurt

In February, a teacher was allowed to retire after repeating the N-word to a student. In September, students circulated a petition to bring back slavery.

Other area districts and private schools have also made headlines for similar issues, including teachers using slurs or making racist comments.

But the district also wants to tackle less public examples of bias.

Barnes said parents tell him stories of inappropriate comments directed at them or their children, such as a teacher preemptively worrying that a young black student is causing trouble.

She also has her own stories.

In one case, a teacher didn’t intervene when a student told her daughter that her opinion didn’t matter because she was black.

A counselor asked why Barnes’ other daughter wanted to take an advanced biology internship. When she explained that she wanted to be a doctor, the counselor said that there weren’t many doctors who looked like her.

“She came up to me, and I had to get up there and say, like, ‘Who are you to discourage a student who wants to be something or do something with themselves?'” Barnes said. .

Her daughter got the top grade in the class and is now a pre-med student, Barnes said, but she worries some students won’t share their experiences or have support to deal with them.

Deayon – who spoke to The Beacon alongside her fellow co-chairs of the Park Hill Diversity, Equity, Inclusion and Belonging Council – said the district is working to educate people on how comments can hurt people or make them feel like they don’t belong.

Examples include asking to touch someone’s hair or expressing surprise that someone speaks good English.

June LeBlanc, council co-chair and a mother of three in the district, said students aren’t always encouraged to respect others through pop culture and social media.

“What we want to do is make sure that when the students walk through those doors, when the teachers come in to teach, when the sales people come in the doors, they feel like they can be authentic themselves, they don’t don’t have to feel like they have to dress up or have to prove themselves,” she said.

“If I’m a 12-year-old African-American and I say to my teacher, ‘I want to be an astronaut,’ I shouldn’t ask my teacher to say, ‘Well, are you sure you can do this? ‘”

Instead, the teacher should respond with understanding and direct the student to opportunities and resources, LeBlanc said.

Danny Todtfeld, co-chairman and principal of Prairie Point Elementary, said kids can’t focus on their schoolwork if they have to devote two-thirds of their brains to assimilation.

“We just want to make sure (that) when kids come to school, nothing adds more stress that stops them from learning,” he said.

“They’re being abused by (the) legislature…social media, everywhere,” she said. “I think it’s important that our schools make sure they feel safe.”

A struggle for those working on diversity in the district is the refusal of some community members.

“When we sit down and have one-on-one conversations with people, no one can really argue with what we’re doing,” Todtfeld said. “We try to create a place where all students feel safe, all students are accepted, and all students are respected.”

But he became more aware of the ways the district’s actions could be misinterpreted.

For example, when parents learned that elementary school students had come out to LGBTQ, some thought the district was teaching young children about sexual preferences.

That’s not true, Todtfeld said. But it is true that LGBTQ students and students with LGBTQ parents need to feel like they belong.

Tracie Rezzelle, a parent of two students from the district who worked on Terwilleger’s campaign and also supported Barnes, said the election revealed to her the resistance the district faced. Some candidates and their supporters equated black history with critical race theory or called DEI’s efforts “reverse racism.”

But Rezzelle said she saw the election results as a sign of hope.

“I also think a lot of people recognize that we have a lot of work to do,” she said.

Deayon said she was encouraged by how informed and engaged voters were around DEI topics.

“I think our crisis situations have shown our community that we have work to do and room for growth,” she said. “And so, I think that was a huge and significant factor in this recent school board election, in terms of what community members were looking for and listening to.”

Deayon said the district has made improvements related to DEI over the years, but efforts are now more organized and intentional.

For example, after realizing that the gifted program was not diverse, the district worked to change that, not by lowering IQ standards, but by inviting more students to try out the program. and ensuring that the tests are not biased.

Park Hill has also incorporated equity and access into its strategic plan, worked with consultants and community partners, and removed barriers to student access to programs – for example, by providing transportation and eliminating costs.

The district’s Access and Inclusion page also notes that it is working to improve staff diversity and eliminate disparities in discipline.

A Beacon report last fall found the district referred black students to law enforcement at more than double the rate of white students, though it reported no arrests.

A timeline of the district’s access and inclusion efforts begins in 2015 and becomes more detailed with Deayon’s hiring in mid-2021. One of his initial plans was to begin assembling the DEIB Council.

The board has encouraged broader participation by organizing forums for the community, staff and students.

Ryann Banks, the council’s student co-chair, said the forums are an overall attempt at improvement.

“We learn from incidents that have happened in the past, and things that are happening now,” they said. “It’s not just something that, ‘Oh, here’s an incident, let’s just create something to cover it up.’ No, it’s part of us, we’re growing as a neighborhood.

A trend emerging in the conversations is that people want a more diverse workforce.

Barnes said she wants the district to set goals and targets to improve teacher and staff diversity.

There is a nationwide and statewide shortage of teachers of color, but she suggested Park Hill could work to recruit her own students and help support their education if they return to the district in as teachers.

Barnes, who is serving a three-year term, said the district cannot delay moving from gathering feedback to implementing real change.