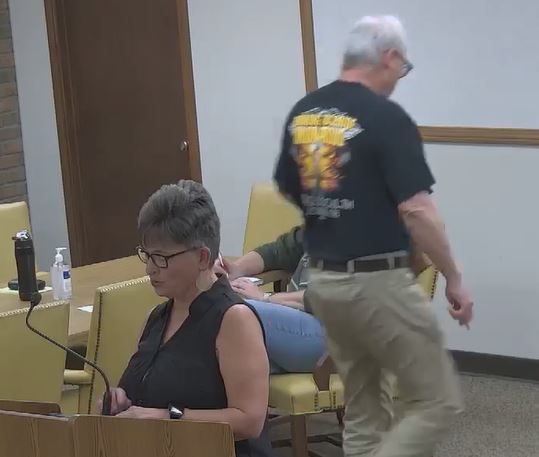 BUCYRUS—The health and safety committee meeting in the town council chambers of Bucyrus ended with the exit of a councilman and a citizen demanding his removal.

Dishon noted that she sent an email to all board members outlining the steps needed to remove someone from the board:

(l) Unless the Sergeant-at-Arms perceives an immediate threat of violence or destruction of property requiring immediate action, the following procedure will be used to eliminate a subject or subjects who refuse to leave the podium or disrupt the meeting.

(2) Notice. The Chairman of the Board will ask any speaker to end their time on the podium or cease any disruptive activity.

(4) Second Warning: If the subject(s) fails to comply following the first warning, then the Chairman of the Council shall revoke the subject(s) right to remain in the meeting room and inform the subject(s) that they will be subject to arrest for trespassing if they do not leave the room immediately and peacefully.

(l) If, following the warnings set out in paragraph (a) hereof, the subject(s) does not leave, the Sergeant-at-Arms may remove the subject(s) from the meeting.

(a) The Sergeant-at-Arms will first ask the subject to leave the meeting. If the subject(s) leave, no further action will be taken.

(b) If the subject(s) does not leave immediately at the request of the Sergeant-at-Arms, the subject(s) will be placed under arrest, physically removed from the premises, charged with criminal trespassing and any other applicable act. violations of the law, and immediately transported. (This document has been copied from the original printed rules and may contain grammatical errors.)

Dishon told committee members that Wirebaugh did not follow procedures in stating the exact wording he should say (noted in Section Four: Second Warning).

Wirebaugh interrupted Dishon when he told her, “Yeah, I did.”

With that, while Dishon was still speaking, Wirebaugh left the meeting.

Dishon didn’t miss a beat and quoted Wirebaugh’s response to his email:

“I believe the second sentence spells it out clearly.” Citing the resolution, Wirebaugh said:

“The Sergeant-at-Arms will carry out all orders given by the President of Council or the presiding member for the purpose of maintaining order at meetings of Council or Committees.”

Wirebaugh went on to say, “In my opinion, the speaker’s behavior was beyond reprehensible and will not be tolerated by this council. Second, the speaker’s constant interruptions gave little or no opportunity for repeated warnings. In today’s world, we can either be part of the problem or part of the solution,” Wirebaugh wrote.

Dishon told the board that she took that response as an excuse for not applying due process properly.

“Again, I don’t have a problem with the rules, but they’re not being followed properly. Is it so hard? Dison asked.

Fankhauser said that during his time as chairman of the board, he kept a copy of the rules (for removing someone from the meeting) on ​​the corner of his desk: “I never had to use it. one time. I would like it to be noted in the minutes that Dan Wirebaugh has just left this meeting. It should be noted as unapologetic.

While Vicki was talking, he couldn’t bear her telling the truth. So he gets out of here. An elected official does not have the right to decide whether he will be absent or not excused. Dan didn’t follow the statute that was passed for removing someone from the meeting. Therefore, I allege that he committed professional misconduct,” Fankhauser said.

Fankhauser further told the committee that there is a procedure in the revised Ohio code that would have to be implemented for Dan Wirebaugh to be removed from office. This ORV prescription is 733.72.

“You can search for it. It takes five registered voters to bring this complaint to court. I invite each of you on the board to join in this potential filing because I have a feeling there is going to be a filing,” Fankhauser concluded.